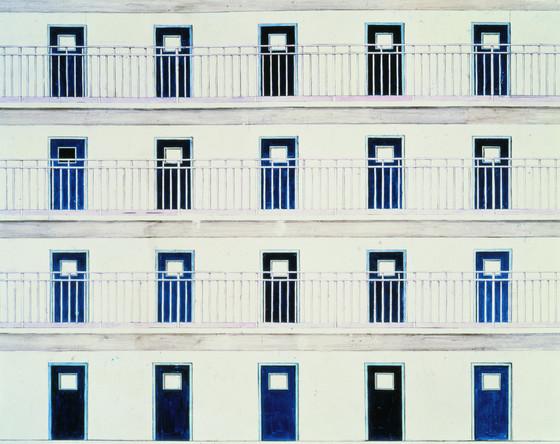 If you love drawing, please run, don’t walk, to see LACMA’s exhibition of Toba Khedoori’s work through March 19. It covers two decades of the Los Angeles artist’s practice with 25 stunning works. Usually drawings would be dwarfed by the voluminous spaces of the BCAM building, but Khedoori’s manage to occupy the space beautifully. That is partly because some of her drawings are very very large, and partly because they are often making reference to architectural forms and space.

Works in the first gallery, for example, are both. These are early works on paper, from the mid-90s and are up to 11’ tall, and they depict repeated architectural or built forms. I find “Untitled (buildings/windows)” (1994) especially compelling. It shows rows and rows of old-fashioned, double-hung windows, with the shades drawn up at different heights, inviting one to think about tenement housing and the people who might be living behind these anonymous apertures. Another drawing which has a similarly enigmatic, although more sinister, effect depicts a series of closed doors lined up behind a metal balustrade. It’s as if you are in prison – confronting the cold blank of solitary confinement.

Khedoori does have other subjects, such as a series of theater seats, and in a middle gallery, a burning fireplace set against a black background adjacent to a burning fireplace set against a white background. The pairing of the latter drawings in the same room challenges us to compare them, and make a choice. In finishing her works, she often coats the paper with layers of encaustic, wax, and oil, which stiffens the paper and gives it a noticeable sheen.

The last room has more intimate pieces, ones that are medium-sized, that are worth contemplating quietly and unhurriedly. There are several mesmerizing geometric works which still retain, deliberately of course, the slight wobble of the hand. And here she shows her off her ability to draw from nature, as well. They look like drawings, but they are oil paintings on linen. “Untitled (leaves/branches)” is a tangle of green oval leaves, pitched at different angles to the light, with their most elegant intertwine of thin, twisting branches. Clearly, the natural world provides a softer, more lyrical inspiration for the artist.

Scarlet Cheng is an LA-based arts writer, the former managing editor of Asian Art News. She also teaches art and film history at Art Center College of Design and Otis College of Art and Design.