Review: Jean Genet’s ‘The Maids’ @ A Noise Within 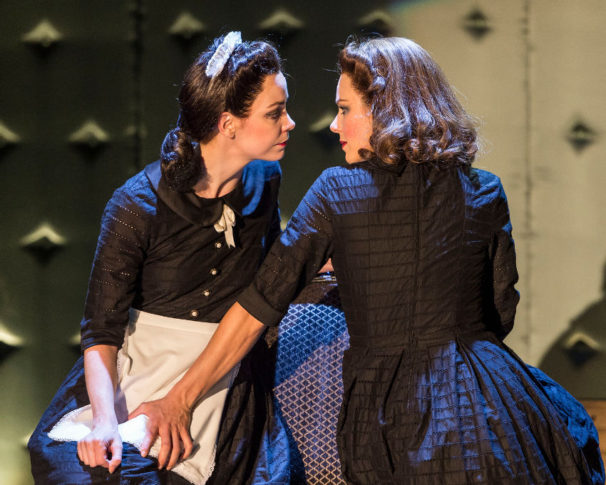 Jean Genet had a remarkable career – a thief, a jailbird, an internationally celebrated playwright whose work often embodied his compatriot’s Jean-Paul Sartre’s famous line, “Hell is other people.” That was from Sartre’s play “No Exit,” and Genet’s play “The Maids” (1947) depicts a particularly suffocating hell.

Two sisters, maids in a bourgeois French household circa 1930s, are worked mercilessly from morning to night and expected to cater to their mistress’ every whim. Their relief is to take turns playing this imperious employer, the one who humiliates and belittles them, when she is away. In short, they get to play the oppressor and the oppressed. It’s a difficult play, and kudos to A Noise Within and director Stephanie Shroyer for the current production.

The drama opens on the maids, Solange (Donnla Hughes) and Claire (Jaimi Paige), role-playing in Madame’s bedchamber. The assault and battery goes on far too long, but that’s Genet indulging in his penchant for S&M. One gets a little air when the charismatic but self-indulgent Madame (Emily Kosloski) returns, and has a diva turn — at first doing a Gloria Swanson because her lover has been arrested, and then, when she finds out he’s been released, getting dressed to the nines to go meet him at a bar. 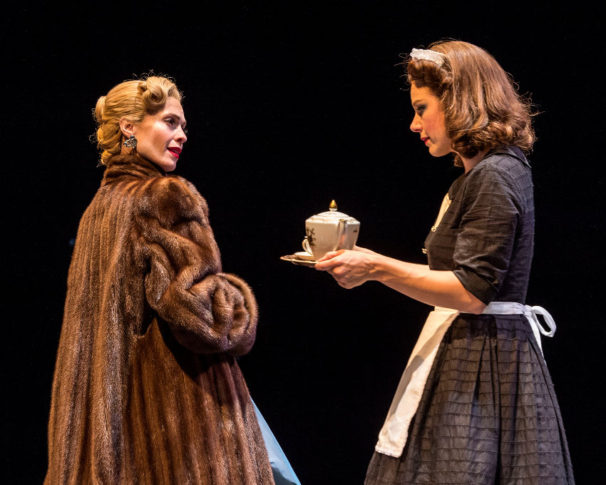 The sisters are played by two very capable actresses, but I found the emotional tone of the story lacking. That may be the problem of the play, which is wordy to a fault and lacks character development and backstory and, well, dramatic plausibility. Hughes did seem more soulful by wearing the haunted look of one who feels guilty for being alive. Another problem is that the two actresses appear too close in age, and at first I mistook the older one for the younger one.  This is an important detail since the older sister/younger sister dynamics is supposed to partly mirror the master/servant dynamics of Genet’s angry take on class and the abuse of power.

To be highly applauded are production design by Frederica Nascimento and lighting design by Ken Booth – the play opens like a film noir with velvety shadows and dramatic lighting.  The set is dominated foreground by a gigantic bed, and a vanity topped by an oval “mirror” (in fact, an open frame) which is rolled around to clever effect.  The play is based on a notorious double murder that occurred in France in 1933, and American playwright Wendy Kesselman wrote a more insightful version, and one much more sympathetic to the women, “My Sister in This House.”

photo credit: Craig Schwartz for A Noise Within