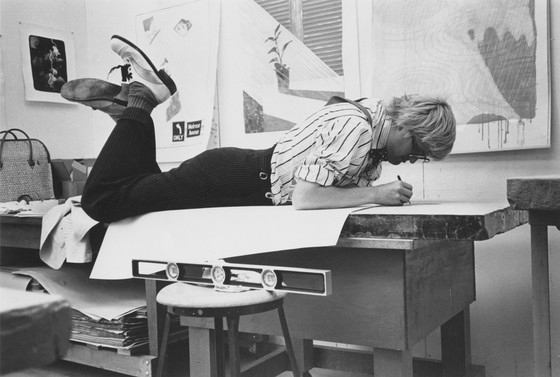 It’s no surprise anymore when an American artist of any discipline or media turns out prints. Painter, sculptor, installation specialist, conceptualist, land mover—all find something in their trick bags that will fit on a piece of paper with a high-rag content. It wasn’t always so. None of the Abstract Expressionist vilde chayas who dominated 1950s American art made prints. But by the early ‘70s, the practice was chic.

What turned the tide was the print renaissance in Los Angeles during the ‘60s and ‘70s. Painter June Wayne (1918-2011) took printing seriously enough to give her “Valediction of the Weeping” suite over to a Parisian lithographer in1958. Frustrated by ignorance of the print medium, she opened her Tamarind Lithography Workshop in 1960. For the next twelve years it was the hub of a resurgence of local lithography. The Tamarind epoch was an important part of L.A.’s growth as an art capitol. 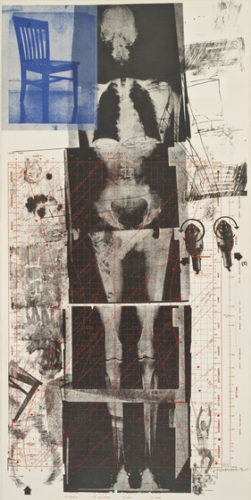 The baton was passed when Sidney Felsen and Stanley Grinstein’s Gemini G.E.L. studio opened 50 years ago. Where Tamarind had strengthened the local art community, Gemini attracted East Coast artists, many with far-flung ideas about what they wanted to do—or no ideas at all. Gemini became known for an accommodating staff that innovated techniques and processes. Where else could John Cage pull off his random words on successive Plexiglas plates, or Robert Rauschenberg his man-sized schematic pieces, or Claes Oldenburg his cast aqua polyurethane car? Like the Disney Studios, Gemini became the place to make dreams come true.

L.A. County Art Museum pays small homage with its current show, “The Serial Impulse at Gemini G.E.L.,” surveying multi-part work by various artists from 1966 to 2014. It’s a satisfying grouping that can be enjoyed for many different qualities.

A glass case housing a suite of Claes Oldenburg’s plans and notes on monument proposals (’67) can be savored for their tongue-in-cheek audaciousness and the low-key whimsy of his drawings. 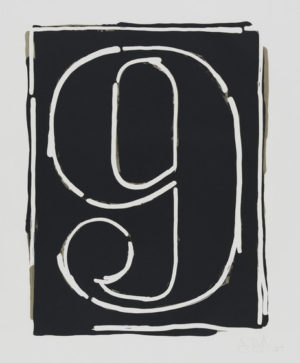 Marvel at the Roy Lichtenstein black-and-white half tones—part of a woodcut series. Get lost in the aquatint and drypoint cosmos of Vija Celmins’ “Concentric Bearings” (’84) photogravures. Or just enjoy the superb draftsmanship of Jasper Johns on a series of large-scale numerals.

The Robert Rauschenberg “Booster and 7 Studies” are somewhat iconic, with their overlays of x-rays and other elements. Richard Serra’s eight-foot tall black “Transversals” slabs are characteristically minimalist, until you examine their finely ground textures and wonder how the hell they were executed.

While there’s a little something for everyone in the show, depending on your taste, not all will touch the viewer. Bruce Nauman’s “Fingers and Holes” (’94) are drawings of his right hand by his left, and vice versa; get it? Michael Heizer’s textural pieces are thin on image and impact, while Ed Ruscha’s “Various Cheeses” (’76) are just okay. An inordinate amount of space is given over to eight installments of “A French Horn Player, Blue Moon and Other Objects” (’94 and ’12) by John Baldessari, with their usual color lozenges obscuring the faces of the photo-shopped figures. If you’ve seen one, you’ve seen ‘em all. 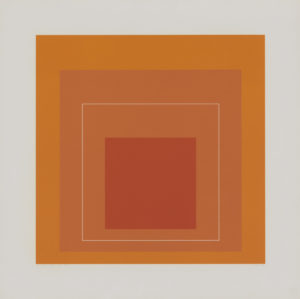 A set of six complementary studies (’73) by the color theorist Josef Albers, however, is particularly impressive. The Bauhaus veteran made a science of color relationships and taught their deeper applications to generations of American artists. His pieces fool the eye with their placement of darks and lights within his standard square-and-rectangle format. But the perfectly square-and-uniform centerlines on each piece are unprinted paper—a testament to the technical supremacy of the Gemini staff.

One comment on “Print pioneers of Los Angeles: Gemini G.E.L.”