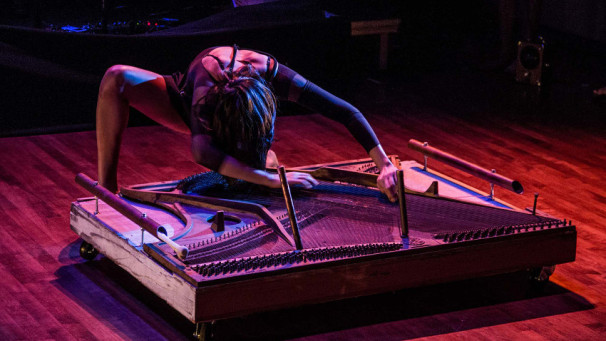 Spooling through 13 staged songs for a nicely compact 65 minutes, the highly versatile and handsome troupe of eleven (seven musicians, four dancers) radiate a spontaneous pleasure in performance that is rarely seen, and difficult for viewers to resist.

A promising sight greets the audience upon arrival: a stageful of powerful musical instruments including five medium-sized kettle drums, a huge string bass, multiple electric guitars, drum trap-set and slicing the air space, Luke and Holly Rothschild’s signature, long-stringed harp deployed as a sculptural centerpiece. Twanging and plucking this instrument cleverly converts to a dance occasion. String Theory uses every inch of the proffered square footage, including a smallish but beautifully lit raised stage, with wood-floored performance space stretching toward the audience seated on risers. Even the corners of the room host activity; at one point, an upright piano gets dragged across the space while being played. 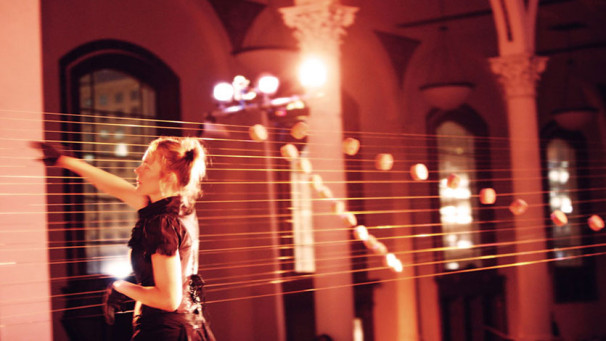 An excellent quartet of dancers traipses in and out of the program, as though in a variety show. Two slender, leggy leading ladies, Livinia Findikoglu and Andrea Sobke, garbed like vixens in black mini-skirts and bare legs, squirm and squiggle like the final water drops shaken from a garden hose. Joined by Danny Dolan and Tess Hewlett, the foursome (well) execute Holly Rothschild’s athletic pairings; they also take up unusual tasks. They sing do-wop-style at standing mikes; they bang drums behind Holly Rothschild’s demonic leadership; donning harnesses, they stretch the strings of a living harp across the stage. In my favorite episode, each dancer drags a tiny amplifier by a long chord, like a tiny pet poodle or a child’s piece of luggage, spilling forth ambient sound, primarily heavy breathing, while moving and posing. It’s a witty extension of the evening’s stringed motif.

The creativity is keyed on thirteen original songs, some soulful, even celestial. While the music errs toward a mystical cultish tone, it doesn’t take itself too seriously, with one number entitled, “Dirge.” And indeed it is. Everyone sings; I like this, but Robert Amjarv strongly leads in this area. The band finds a driving force in Julie Pusch’s whining violin – she, too, doubles and triples her duties, singing, playing the synthesizer and then piano. 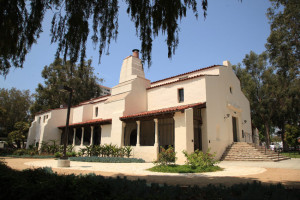 What most appeals to this viewer is the choice performance space, the vintage and spiritual Miles Memorial Playhouse. The Spanish Colonial revival style playhouse, dating to 1929, seems to be thriving under the careful stewardship of landlord The City of Santa Monica.