The Mikado gets a transfusion: Robert Allan Ackerman’s BLOOD 1 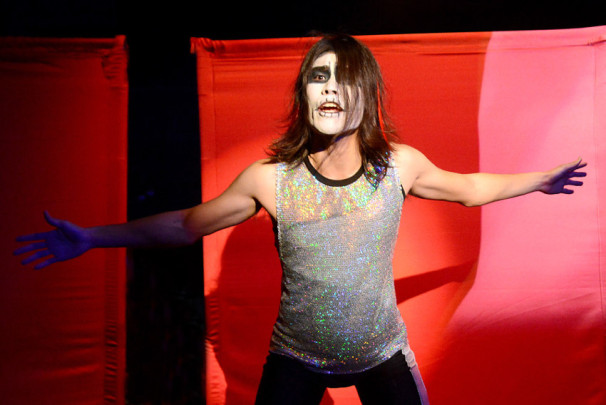 David Bowie would be proud. Within opening minutes of Robert Allan Ackerman’s highly original work of musical theater — it is promoted as a political thriller, to which we say pish tosh — this alluring and initially repellent (he grows on you) figure of glam rock played by Takaaki Hirakawa commands center stage of the tiny performance space at the Complex. Parading haughtily in period (early ’80s) skin-tight jumpsuit and platform boots, he rocks the play’s Brechtian message to the twanging dissonance of Nick Ackerman and Chris Cester’s excellent sound score.

And thus the small gathered audience embarks on an intriguing journey with BLOOD, a new two-act play that reveals the perils of Japan’s closed-off culture under literal and metaphoric attack at its very core: its heartfelt, nearly messianic, belief in its own cultural purity and immunity from, among other foreign contaminants, the AIDS virus.

It’s a first-ever bylined theater piece for Ackerman, the much acclaimed director, an Obie and New York Outer Critics Circle Award-winner/ DGA Award, two-time Golden Globe and five-time Emmy Award nominee. In an intermission chat, he gleefully claimed authorship of the show’s funny, punning song lyrics; the hilarious satiric bending of the “Gentlemen of Japan” song from Gilbert and Sullivan’s “The Mikado” (which is itself a satire, creating layers and layers); and his biggest point of pride (told to a dance writer): that he himself choreographed the work’s terrific song-and-dance numbers.

BLOOD’s fun-and-flowing pageantry tells the saga, based on true events, of a conspiracy to cover up the government-sanctioned sale of HIV-contaminated blood products. American blood sold to hapless Japan, we are well reminded. Through a core of characters you quickly come to care for (several are hemophiliacs perishing from tainted blood transfusions, others tend lovingly to the ill, who founder and perish), the play harshly judges the suppression of truth and labels as murderous the crime of cultural vanity and shaming. 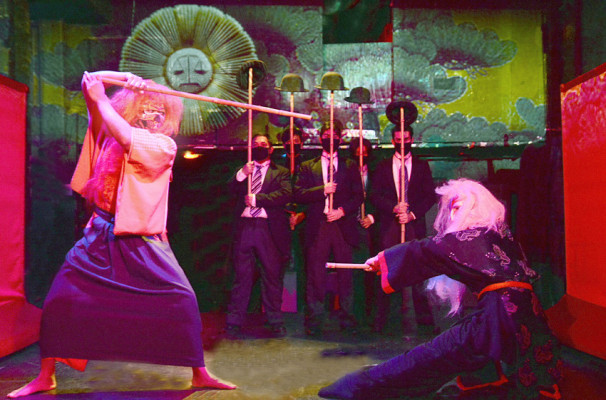 Heady stuff. The show’s first half nearly splits its seams so bursting is the creativity it flings at its audience, which sits half in horror, half in delight at Ackerman’s audacity. The playwright no sooner introduces his characters than he kills them off. Then he covers over the bleakness with rousing song — so it’s a wild one. Witty set transitions trump the show’s home-cooked look in which the predominant props — three blood-red scenic dividers on wheels — morph with endless versatility to give BLOOD’s talented and rarin’-to-go actors the minimal platform from which they heave forth stories. As the act moves to closure, the plotline, which is rests less on action than ideas (transparency/disclosure vs.cover-ups/corruption), loses forward-motion with less and less on the line for the characters. It all levitates to higher grounds of geo-politics. The second act piles on the polemics and BLOOD, whose blazing opening moments spool with such physical zeal, kind of peters under a pile of words. The trial-finale brings as much satisfaction as watching “Judgment at Nuremberg” for the umpteenth time, and kow-towing, used as a climax, is an unconvincing expression of human remorse. The play opts for brandishing blame on evil drug companies and colorless government bureaucrats … not the zesty characters who give BLOOD its lub-dub. 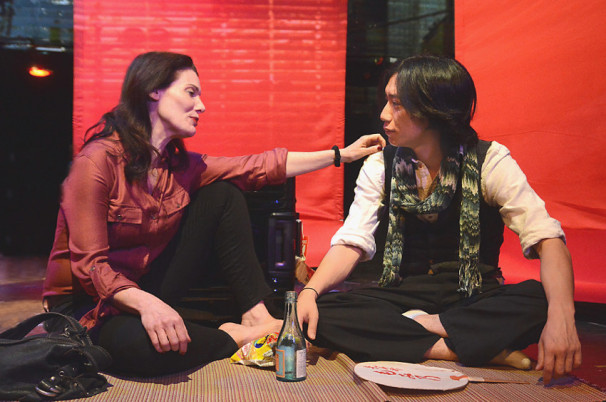 Other quibbles include an over reliance on cultural stereotypes. Japanese are timid, cowardly, repressed; BLOOD also features a ‘real’ JAP, a Jewish-American female reporter described as rude brazen and brash, but who in actress Alexa Hamilton’s sensitive portrayal evinces only integrity in her highly personal struggle for courage.

BLOOD is a witty treatment of a subject that matters so much; some in the audience welled in tears at the memory of those confusing years when AIDs burst forth. Then heroes were few and victims were many. The play is recommended.

Blood | The Complex | thru April 3

One comment on “The Mikado gets a transfusion: Robert Allan Ackerman’s BLOOD”