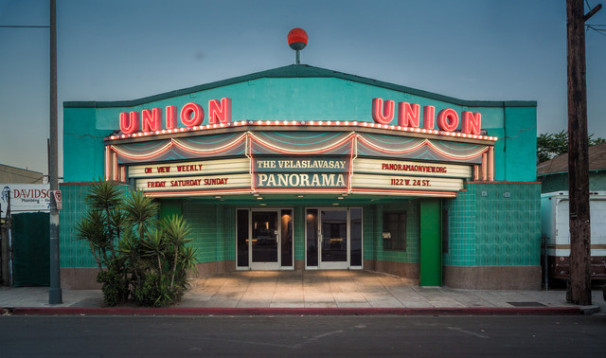 When we last visited the Velaslavasay Panorama, the charming former ‘Union’ movie theater converted into exhibition hall/theatre/gardens, we were shivering on a sojourn to the South Pole at a screening of silent-picture “South” (1919). The ‘polarizing’ event was part of the “Mush to the Movies” series co-sponsored by Los Angeles Filmforum.

Coming soon to the Panorama — and it’s just the thing for the end-of-summer weekend — an evening of music on the glass armonica. 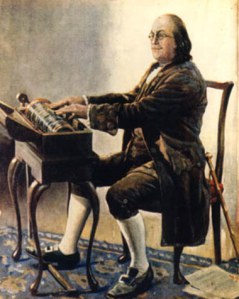 Known for its alluring and ethereal sound, the instrument is a refinement of ‘singing glasses,’ the technique of wetted fingers on wine glasses filled with varying amounts of liquid, a popular concert instrument of the 18th century.

A pre-concert lecture by Professor Allison de Fren of Occidental College will illuminate the instrument’s history, in particular its use in hypnosis treatments by Franz Mesmer and Phantasmagoria shows.

Then will follow a live performance by Lynn Drye, one of the few glass concert artists in the world.

The inventor of the glass armonica did so in his spare time — when he was not flying a kite strung with a key to discover the lightening rod. Yes, Benjamin Franklin, in the early 1760s, is credited with inventing the instrument, one of the  American renaissance man’s many scientific innovations.

Go early to stroll the garden and grounds, or you may purchase one of the limited edition armonica-inspired candles in the Panorama’s gift shop.