Of the companies vying for the attention of Los Angeles’s newly fervored dance audience, BODYTRAFFIC, making its second appearance at Jacob’s Pillow, naturally aspired to top prominence. Lately, however, co-artistic directors Lillian Barbeito and Tina Berkett have adjusted that goal.

“When people thought of Los Angeles, we wanted to BODYTRAFFIC to come to mind,” says Berkett, who doubles as the troupe’s doe-eyed lead dancer. “But we want to have a more fundamental impact on our city. When people think ‘Los Angeles,’ we want them to think dance.”

In full agreement is the equally determined Barbeito, a Botticelli beauty focused on a managerial role having retired from performing last year. “Dance has changed so much in L.A.—and we like to think we played a part in its evolution,” she says. “What gets us excited is the idea of L.A. as a world-class, premiere city for dance.”

The two colleagues sip afternoon coffee at one of LaBrea Avenue’s insistently cool cafés. Their random encounter at a ballet class birthed BODYTRAFFIC in 2008. They rattle off a rich curriculum vitae accrued since the company’s prior Pillow appearance in 2013—an enviable roster of return bookings and new adventures. Read more… 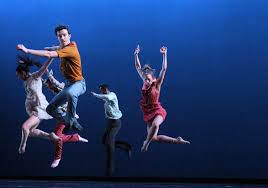