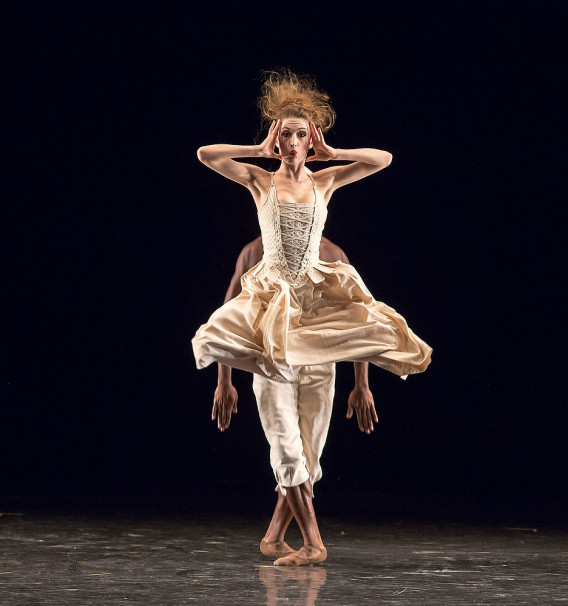 The last time I saw Los Angeles Ballet was at the Ford Theatre in the early 1980s – that, of course, was the other Los Angeles Ballet, the one directed by John Clifford. Always on shaky ground, and much maligned by the Los Angeles Times, it later faced dwindling financial support and stiff competition from the Joffrey Ballet, which was in residence at the Music Center.

I left LA in the nineties and arrived back in time to see the current Los Angeles Ballet’s “Directors’ Choice” program at Royce Hall Saturday, June 6, the final performance of its ninth season. The difference between the two ensembles is like chalk to cheese. Like Clifford, artistic directors Colleen Neary and Thordal Christensen come with a strong Balanchine pedigree, but beyond that — why waste words on comparisons? They have surely been made before.

The mixed bill comprised Balanchine’s “Tchaikovsky Piano Concerto No. 2,” José Limón’s “The Moor’s Pavane,” and “Sechs Tänze” (Six Dances) by Jiří Kylián. At first glance, this looked like an unusual mix. The Balanchine and Limón works, however, both draw on the manners of a bygone age – formal groupings, bows and curtseys from 19th century imperial St. Petersburg (Balanchine), and the processional pavane from the Renaissance (Limón), each with very different results. Balanchine is all dazzling technique; Limón goes for compressed drama. 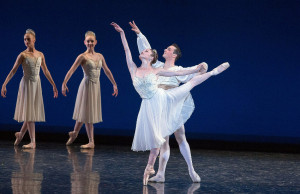 “Tchaikovsky” pays homage to Marius Petipa, the granddaddy of classical ballet. Its grandeur is obvious from the start: the dancers slowly bow and curtsey before launching into torrents of classical sparkle. “Tchaikovsky” is full of beautiful groupings, loads of bourées for the women (which most, but not all, of the ensemble have mastered) and star turns by the quicksilver Julia Cinquemani, and principal Allynne Noelle in her final performance with the company. (Neary and Christensen themselves presented her with a bouquet, eliciting whoops and hollers from the audience.)

Noelle danced with unhurried elegance, her extensions sumptuous, her upper body as expressive as her legs and feet, which wasn’t always the case with the younger dancers. Ulrik Birkkjær wowed with intricate beaten jumps (no surprise, he’s from The Royal Danish Ballet where fast footwork is de rigeur), but could have shown more flair in the big jumps. Some of the sections felt cramped: I’d like to see the company perform this on a bigger stage where they could really let loose. But these dancers clearly know Balanchine — a treat to see. 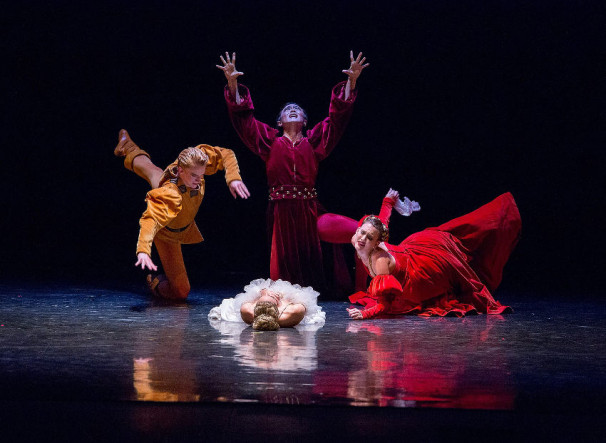 “The Moor’s Pavane” is Limón’s take on Shakespeare’s “Othello.” The formal pavane is the choreographic core. Behind the great formality, however, hides great treachery. Zheng Hua Li was brilliant as The Moor, attacking each gesture with fierce conviction. Bianca Bulle was all delicacy as his wife. Erik Thordal-Christensen slithered as the lying Friend; Allyssa Bross was his duplicitous wife. “The Moor’s Pavane” was a Los Angeles Ballet premiere this season, and they did a beautiful job with it. Definitely a keeper. 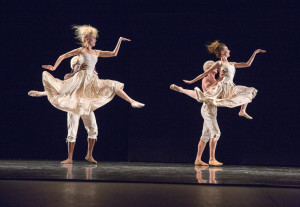 The broad humor of Kylián’s “Sechs Tänze” is set to Mozart and pays homage to his era, with white powdered wigs for the men. (The dancers have white powdered faces too, which on Christopher McDaniel, an African American, made me strangely uncomfortable.) The movement vocabulary is anything but 18th century, however, with lots of comic pushing, pulling and falling. The women jerk like puppets. The men pose. The broad, physical humor is at times in sync with the whimsy of the music, at times in counterpoint. An ominous rumble between each dance indicates all is not right with the world, but why worry, when soap bubbles are falling from above? Which they do, at the end.

Neary asked for donations at the start of the evening – I guess she has to these days – and acknowledged the five dancers who are leaving: Britt Lazenga, McDaniel, Noelle and Naomi Shapira, along with ballet mistress Catherine Cowgill. Big applause. For them and a terrific evening of dance.