Beginning May 18, for four weeks, Chris Burden’s Ode to Santos Dumont a kinetic airship sculpture inspired by Brazilian-born pioneer aviator Alberto Santos-Dumont, will be on view at LACMA. Burden, the noted conceptual/performance artist, completed his plans for the LACMA exhibit before he passed away May 10.

Santos-Dumont, considered the father of aviation in France, flew his petrol-powered dirigible around the Eiffel Tower in 1901 to great public acclaim. 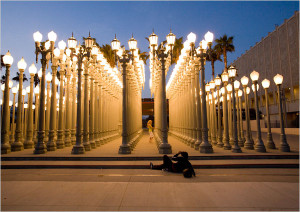 Burden’s LACMA entry-plaza sculpture from 2008, “Urban LIght,” in the form of a Classical Greek temple composed of 202 cast-iron street lamps, adds a beacon of humanity to the museum’s threshold. Writing in the Los Angeles Times, critic Christopher Knight quotes LACMA director Michael Govan saying that with “Urban Light,” Burden “wanted to put the miracle back in the Miracle Mile.”

“Few artists can claim a body of work as rich, varied, and influential as Chris Burden—from his early, definitive and provocative performances to his large-scale installations and sculptures,” said Govan.