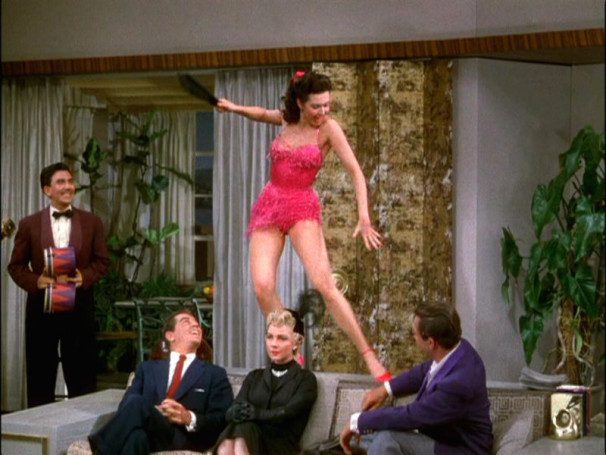 It was awfully fun, during TCM Fest 2015, to run into Jon Olivan who heads up the TCM Classic Movie Fan Club in Los Angeles. We mixed and mingled in Club TCM, sipping (complementary) Humphrey Bogart gin surrounded by Mike Kaplan’s great dance-movie posters exhibited in that lounge. Olivan shared a special memory of “Kiss Me Kate,” which I was about to view in a 3-D screening.

The high point of the movie (Bob Fosse’s historic one-off choreographic outing in Hermes Pan’s movie, “From This Moment On,” a close second) is the great Ann Miller, a human blowtorch blasting apart the movie screen clad in a mesmerizing hot-pink skivvie. ‘Torpedo Ann” bullet-taps her way through a snobby Manhattan party singing Cole Porter’s “Too Darn Hot.”

Quite a sensation in all three dimensions. I rather think she had four. What a bod!

I went to a 3D screening of “Kiss Me Kate” in 35mm in the early to mid-80s at the Vista Theater which had Ann Miller come to the theater directly (still in costume) from her last, closing-night performance of Sugar Babies at the Pantages. She was accompanied by  LA Times writer Kevin Thomas. In the middle of the audience was an older man who started heckling Ann when she recalled that it had supposedly taken two weeks to rehearse that “Too Darn Hot” number. She stood up, put her hands on her hips, and shouted back into the dark audience “I beg your pardon” — only to realize it was choreographer Hermes Pan who surprised Ann by being in the audience and clarified that the preparation took nearly six weeks and was almost scrapped from the movie because they couldn’t get it right. What a fun memory!