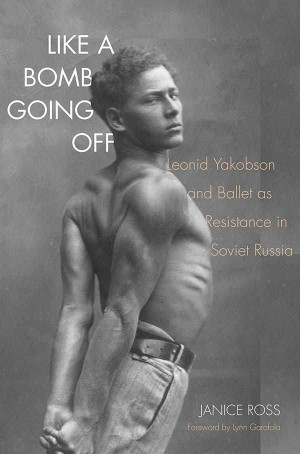 Our good friend, the Stanford University-based dance historian Janice Ross, has written an important new biography about a seminal choreographer in the Soviet Union whose name does not have much recognition in the U.S.

Few outside Russia know of Leonid Yakobson, a contemporary to George Balanchine and the leading modernist — and only Jewish — choreographer to work in Soviet Russia. Yakobson remained in Lenin’s Russia and survived censorship during the darkest days of Stalin. Similar to Shostakovich, he suffered for his art.

Ross’s book, Like A Bomb Going Off: Leonid Yakobson and Ballet as Resistance in Soviet Russia, just published, will provide material for one of two keynote talks at the Connick Conference a Jewish and Israeli arts conference at the end of March.

Ross will introduce Yakobson’s singular body of revolutionary dances that spoke to the Soviet condition. This sounds fascinating.

The book received a beautiful endorsement from Mikhail Baryshnikov who notes, “I salute Janice Ross for allowing us to peek behind the curtain of Yakobson’s extraordinarily creative life. His personal struggle for freedom – in life and in his art – was exemplary knowing the time and the place in which he fought to make his dreams and ideas into theatrical reality.”

Loads of interesting talks at the Conney Conference, which has roots at the University of Wisconsin but this year takes place on the campus of USC. The rich  plethora of subjects to be addressed (many in dance, other art forms as well) includes one by arts·meme friend Karen Goodman speaking on Benjamin Zemach. Check the conference schedule here.