In a cultural mash-up that could perhaps happen anywhere — but let’s face it, it succeeds best in crazy Los Angeles — a Jew and a North Korean are celebrating Jesus’s birthday by screening “The Interview” at the Egyptian Theatre, the movie palace Sid Grauman built in 1922. The screenings are the best rebuttal to the frisson across the nation when Sony Corporation fearfully pulled the picture’s dissemination to a broad public late last week.

“The Interview”?? That would be the critically pilloried Seth Rogen-James Franco comedy that nearly melted down the Bill of Rights and put us into World War III with a nuclear power on Friday. God knows what damage it cost Sony. My only question is: If North Korea bombs the Egyptian Theatre isn’t that kind of like going to war with Egypt?

In the year’s most notorious film, tabloid TV host Dave Skylark (James Franco) and his producer Aaron Rapoport (Seth Rogen) score an unusual coup when North Korean ruler Kim Jung-Un (Randall Park) agrees to do an interview for their show. But the CIA sees this as a golden opportunity to assassinate the reclusive dictator, and Skylark and Rapoport are soon in way over their heads as hapless secret agents. Like they did in PINEAPPLE EXPRESS, the Goldberg-Rogen-Franco axis of comedy delivers some outlandish action sequences along with the laughs. 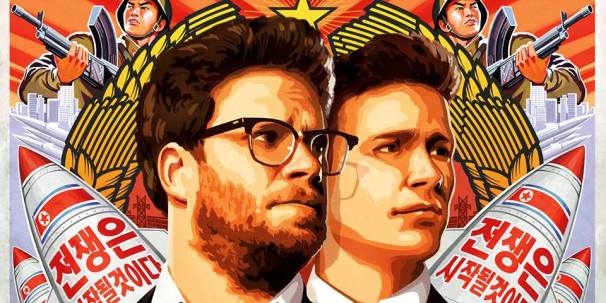 One comment on “Sid Grauman, Kim Jong Un collude on Christmas to screen “The Interview””