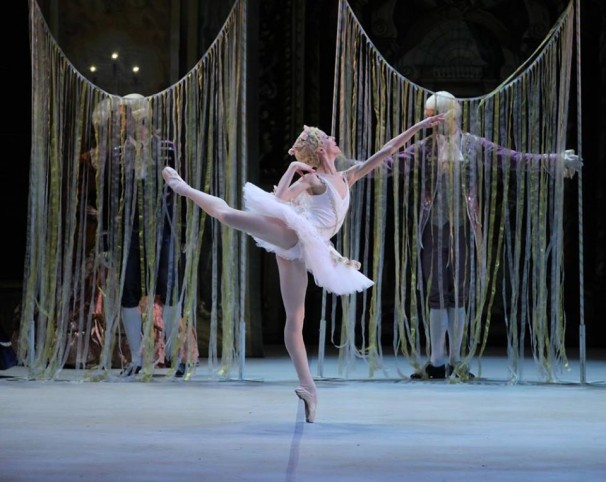 This stunner of a high-attitude position, poised on a set of million-dollar legs comes from Mikhailovsky Ballet ballerina Veronika Ignatyeva, as Cupid, in “Flames of Paris.” The French Revolutionary ballet, first created in Stalinist Russia in 1932, will be on view Nov 28-30 at Segerstrom Center for the Arts over Thanksgiving weekend. The production, in a restaging by Mikhailovsky ballet master Mikhail Messerer (from original choreography by Vasily Vaynonen to music by Boris Asafiev) promises an excursion in a time capsule back to high-Soviet hijinx, if such a thing ever existed.

Critical word from New York is very positive. And an alluring photo features arts·meme darling Ivan Vasiliev waving le drapeau français to spur the troops, or in this case the troupers. (We last saw Vasiliev considerably less costumed.) In short, nothing would keep us from hurtling southward to ‘Moscow on the 405 Freeway,’ Segerstrom Center for the Arts, where The Russians are Coming, The Russians are Coming. 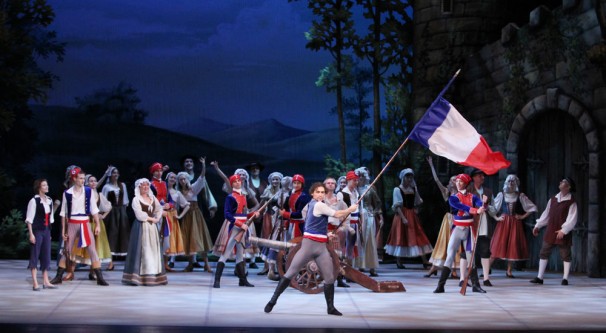 The school, which ostensibly will tap a talent pool of young dancers who cannot access New York, carries the name of Orange County philanthropist William J. Gillespie, a generous donor to the Center for much of the institution’s history and a member of ABT’s board of directors since 1999.

It stands as the second recent infusion of New York dance pedogogy into our market, the first, directed by Benjamin Millepied, exists at the Colburn School in downtown Los Angeles.