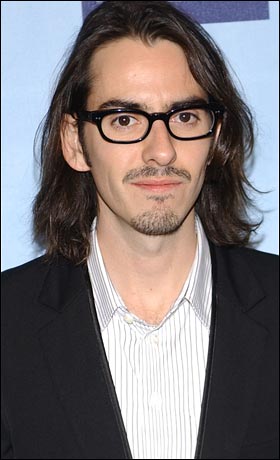 It was beyond beautiful, a huge pleasant jolt, in the midst of a wonderful, sold-out “The Fab Faux” Beatles tribute performance last night at Valley Performing Arts Center, when guest artist, Dhani Harrison, pictured at left, took to the stage.

The only offspring of ‘the quiet Beatle’ strummed his guitar and honored his father by performing a song perhaps not well known (except to me and really the entire rocking audience at the Center last night), “Savoy Truffle.”

Truly the spitting image of George Harrison, a guitar master and composer whose departure from our planet was premature and sad, the sight and sound of the son was a pleasing compensation. Harrison père’s twanging guitar solo punctuates “Truffle.”

[Notes Wikipedia: “Harrison is named after the 6th and 7th notes of the Indian music scale, dha and ni. Dhani is also a raga in north Indian classical music.”] 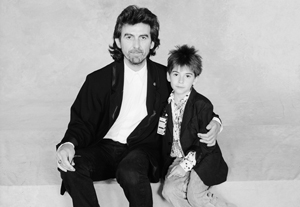 “It’s great to bring our classical music to a house built for classical music,” noted Will Lee, The Fab Faux’s bass player. He referred to the sparkling acoustics at the four-year old Valley Performing Arts Center, which is the pride of the campus at California State University at Northridge.

The concert rejuvenated, with wonderful rock musicianship, a sprawling cross section of the Beatles song book. The program’s second half replicated the “Abbey Road” album in its entirety.

Creme tangerine and montelimat
A ginger sling with a pineapple heart
A coffee dessert, yes, you know it’s good news
But you’ll have to have them all pulled out
After the Savoy truffle

But you’ll have to have them all pulled out
After the Savoy truffle.

You know that what you eat you are
But what is sweet now, turns so sour
We all know Ob-La-Di-Bla-Da
But can you show me, where you are?