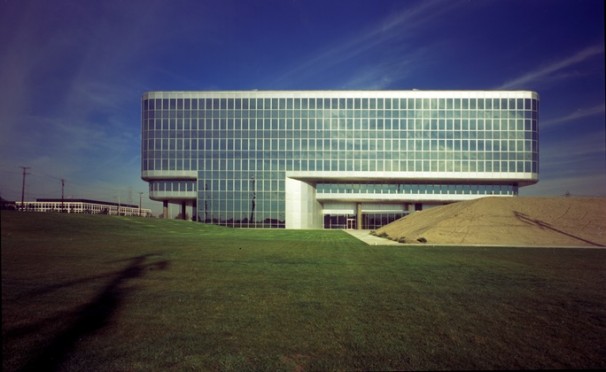 PausePlayPlayPrev|Next
An interesting architecture talk on tap this week at LACMA concerns seventies-era reflecting glass architecture as it developed in Los Angeles, and then became a corporate vernacular through the 1980s.

In the 1960s and ’70s, Los Angeles was home to an era of experimentation and new advances in art and technology. The Light and Space movement emerged around this time, and LACMA initiated its Art & Technology program, pairing artists with aerospace and other companies.

At the same time, architects Cesar Pelli and Anthony Lumsden developed their version of late-modern glass skin building. Used throughout Los Angeles, this style became a telling regional expression of the “high-tech” aesthetic and a new corporate vernacular.

Daniel Paul, an architectural historian who has worked with the City of Los Angeles to evaluate late-modern and postmodern architecture for Historical-Cultural Monument Status, will discuss the influence of aerospace and technology industries on architecture and design, and explain the high-tech design idiom.