Review: National Ballet of Canada’s “Romeo and Juliet” at the Music Center 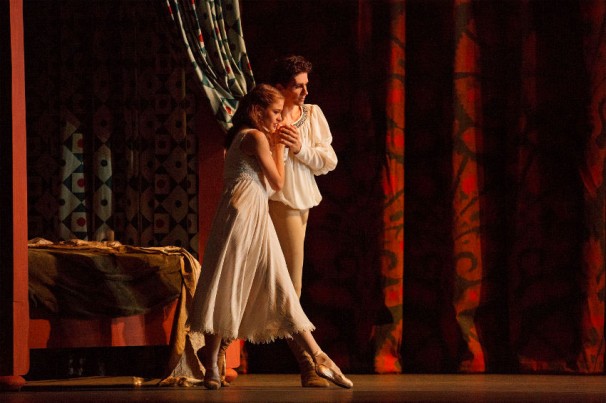 Despite minor fits and starts in a “Romeo” that hiccuped, especially in the first act, with a few choppy transitions, nonetheless the choreographer’s driving danciness recast the war horse ballet for R & J newbies — unlike those of us weaned on the Kenneth MacMillan and John Cranko versions.

Ratmansky’s choreographic fusillade, laid down rather thickly through three thorny acts, was kindled, even detonated, by the ballet’s two leading artists who brought infinite, almost thankless, effervescence to the task: Russian-born Elana Lobsanova partnered by Quebecer Guillaume Côté, both marvelous dancers, both proud products of Karen Kain’s National Ballet school. Lobsanova was a revelation; a tiny creature, first childlike, then earthy, then otherworldly as Juliet, she mesmerized.

The “Rat”’s signature style is still unfolding for audiences – including this viewer who by night’s end found its repetitions and cascading steps somewhat wearying — too much of a good thing? A kind of kinetic overdrive. But it is rapidly becoming state of the art as the former Bolshoi Ballet head and current American Ballet Theatre house-choreographer appears to be the only man in North America capable of pulling off classical updates – and audiences want these ballets.

The Canadiens’ admirably disciplined corps de ballet spool as relaxed pros, wonderful performers, all in proper places (this would not be noteworthy had I not just sat through American Ballet Theatre’s “Giselle” three weeks ago in New York). They are ‘all over’ Ratmansky’s “Romeo,” staged for them in 2011. Standouts included the well-cast Piotr Stanczyk, clowning his way toward his own demise as Mercutio, and the physically imperious McGee Maddox as a testosterone-charged Tybalt. The across-the-board excellent character acting included Juliet’s parents and her nursemaid, the latter donning a wonderful all-white, padded costume. 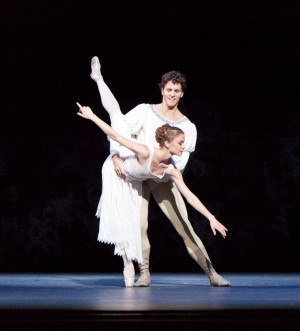 Lobsanova, whom we pray repaired directly to Kendall’s for a big steak dinner considering the massive physicality she delivered over gobs of on-stage time, dazzled with her exquisite classical shapeliness, her amazing, strong feet, and lively acting. With her all the way was Côté, whose direct energy we have enjoyed in “Kings of the Dance,” bringing appealing attentiveness to his Juliet. While the two lacked a certain physical chemistry, this was abundantly overcome by their beautiful responsiveness to each other as they, as it were, bourréed toward their tragic outcome.

The production at the Chandler had other stars. This R & J dazzles with its Richard Hudson production design; he receives joint credit for sets and costumes. All of this physical plant sprung to vivid life by Jennifer Tipton’s ace lighting schemes. The set is function-first: there is no build-out; it’s just a big box enhanced by bold Italian Renaissance colors and motifs. Costumes are gorgeous, particularly those of the first-act ballroom scene — Ratmansky’s choreographic triumph. This Dance at the Gym is a whirling seascape of bobbing twisting thrusting Capulets and Montagues, displaying, through dance, the women’s ample skirts and assorted headdresses in something akin to a couture runway show. It’s not clear whether costume or choreography propels the action in this effective manifestation of Prokoviev’s forceful music. Then suddenly, appearing amidst the maelstrom clad in a shimmering light-blue gown, her hair upswept with a simple headpiece, stands Juliet. Magical.