Specter of Nijinsky haunts Republic Pictures’ “Specter of the Rose” 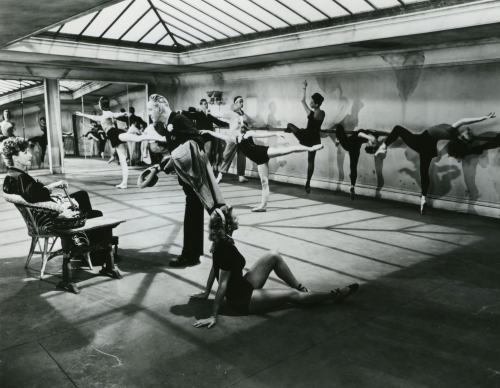 The photo captures the marvelous opening scene of “Specter of the Rose,” a ballet movie from 1946 and a precious artifact of high-Hollywood dance-schmaltz.

Dame Judith Anderson, seated at left, knitting, plays “Madam La Sylph,” the ballet mistress whom Ben Hecht, in his at-once overheated and acerbic screenplay, refers to as “the remains of a pirouette.” 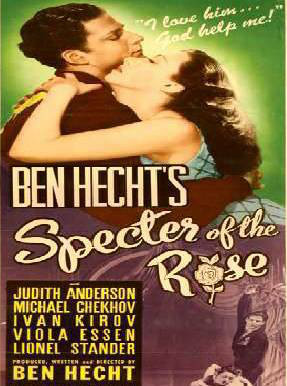 The movie was the passion project of Hecht, the versatile screenwriter commonly called “the Shakespeare of Hollywood.”

Who knew Hecht was a balletomane? But hey, in the forties most intellectuals — and Ben Hecht was a formidable one — grappled sincerely with classical ballet.

Known as a master of just about every film genre, Hecht’s name now sits atop the new genre I am officially launching with this screening: “ballet noir.”

“Spectre” merits viewing for Hecht’s writing and for the fulsome performances provided by a boutique ensemble of great character actors. It makes wonderful use of studio art design and features camera work by cinematographer Lee Garmes.

It’s lovely, as well, for its unabashed expression of passion for a life in the arts. Finally, flick includes some really good dancing. How else can I encourage you to attend?

Bryan Cooper, a friend of arts·meme and one of our smartest film researchers (he is also President of Hollywood Heritage), will join me on stage to share his expertise about Republic Pictures. At that unlikely film factory this delicious morsel of high-art hokum was concocted.

A final felicity: the movie was itself restored in 1982 by UCLA Film & Television Archive. Please come out for this fun Saturday show at the Wilder.