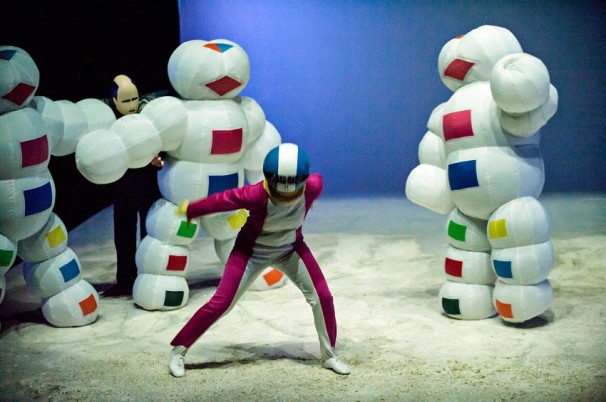 At long last, something new, thank God. It took a cluster of young Italians to inject pop and sizzle into dance’s tired traditional proscenium-arch format, creating a “screen” within the frame, replicating the tiny rectangles into which most audience members gaze much of their day. And I think “Marzo” (Italian for “March”), a super flamboyant work I so much enjoyed at Biennale Dance 2014, when seen around the world, is going to have an impact on the art form. It’s fun, for one thing. 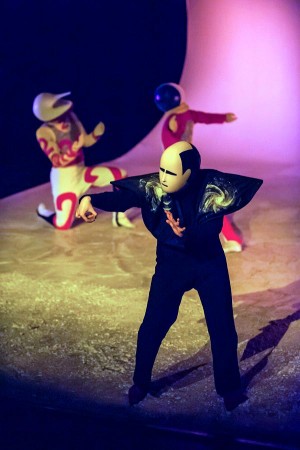 The manga-influenced comic book sprung to life, with oversized figurines and drama, makes dance intriguing, worth pondering, worth sticking with. It allows the viewer a highly focused view of a moving body as it elicits a clear-cut (if somewhat primitive) dance language.

Is that so much to ask? But how often does dance succeed in doing this?

The title refers to a calendar moment that, in the creators’ imaginations, is most propitious for war.

Since ancient times March has always been the month of the war; the Winter fades away and the blooming of the Spring sets time to return to the battlefield.

The program notes imply that “Marzo” explores a time gone by and that it happens on a “distant planet.” But the production design, a rich blend of past and sci-fi futurism, suggests otherwise.

[I must say I enjoyed seeing “Marzo” in the homeland of Italian futurism.] 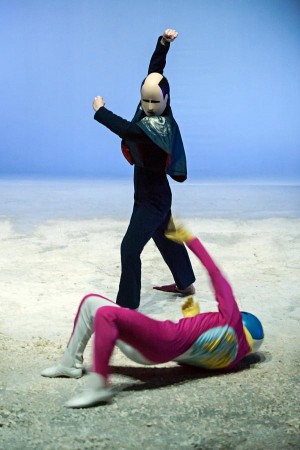 “Marzo” mixes the sensibility of the drama’s hero, a samurai (wonderfully danced by Dewey Dell) with that of extraordinarily beautiful comic-book 3-D puppets.

One such puppet, constructed of solid-white pillows, resembles the lumbering “Michelin Tire” man; another, an exceptional, over-sized five -pointed star, deflates and reflates in a brilliant visual effect. The visual mash pulls the dance into a timeless fantasy zone.

The work spools in the confines of a lovely curved white backdrop. But it blasts out of its container through time travel as well as fantastic use of sound, and its brazen linkage to a popular-culture format: the comic book.

It is “Marzo”‘s replication of the comic-book frame that I find so enthralling, even groundbreaking.

An enveloping sound score credited to Black Fanfare / Demetrio Castellucci pummels the ears with a ballistic, electronic sound track. I loved “Marzo”‘s hip music. Vivid costumes were by Yuichi Yokoyama. I do think that the work could incorporate imagery projected on the back screen, which dullens somewhat over time.

I also liked “Marzo”‘s intense, searing emotion. The work’s libretto, projected in subtitles in Italian and English, thrusts at the audience comic-book prose in which characters profess raw emotion in untamed language like, “Please don’t leave me. Please stay with me.” These are not direct quotes, but re-casts from my memory. I watched “Marzo” in a state of keen excitement, shifting between shock and delight. This hampered my note taking.

Only twenty minutes long, each packed with sci-fi drama, fresh imagery, and kooky dance invention, “Marzo” is next on view in Sydney, then in Norway; I think we need to host it in Los Angeles. Kudos to Biennale Dance director Virgilio Sieni for including “Marzo” on his rich program. 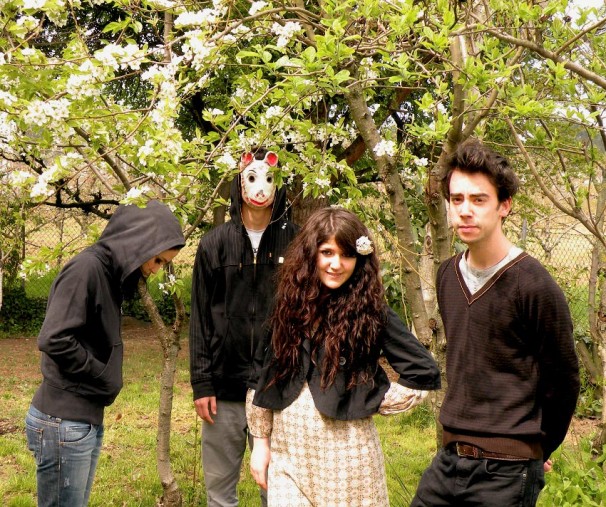