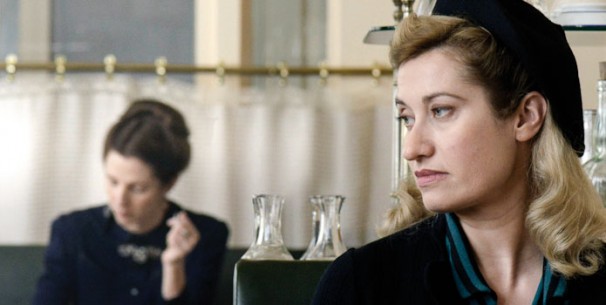 There wasn’t much on day 3 of LAFF that we hadn’t already reported in previous postings — and, no, writer-director Sam Esmail’s frantically busy and wafer-thin two-hander “Comet” doesn’t count— but day 4 was a different matter.

Sometimes at festivals, one’s daily viewing can accidentally form a running theme. Saturday’s theme was What It Is To Be an Artist, led by “Violette” and the magnificent Emmanuelle Devos as early feminist author Violette Leduc. Devos is an unexpected force of nature, which she first revealed in a chain of astonishing performances under the direction of Arnaud Desplechin (particularly the tour de force “Kings and Queen”): Her sleepy face, furtive manner, and dramatically unstylish appearance is about as far from the image of a movie star as is possible in contemporary Western cinema. They combine to tamp down expectations for any viewer who’s never watched her before. But then, when you least expect it, like a predator perfectly adapted to her environment, Devos pounces and devours the screen. Her total domination of “Violette” even swamps the assured hand of director and co-writer Martin Provost, who made such a powerful impression with “Seraphine” (like Leduc, a female artist whom few at first took seriously). Leduc’s early work was championed by Simone de Beauvoir (Sandrine Kimberlain) and supported by powerful patrons (the great Olivier Gourmet) and authors like Jean Genet (Jacques Bonnaffe). She could also be her own worst enemy, and Devos’ brave performance is more interested in what makes Leduc nearly repellant than likeable. Devos isn’t interested in being adored as an actor, but rather in always being interesting, and she rescues “Violette” (which is too long by at least 30 minutes) from bathos. She wills the movie into the more intriguing territory of how artists can try to destroy their own talent, but then make the choice to do the hard work instead. Devos does the impossible: She can make the act of writing on screen look compelling. Screens Wed. June 18, 7:20 p.m.

The central idea behind the festival’s panel on production design, “Reimagining Los Angeles,” was a fascinating one: Discuss the movies “L.A. Confidential” and “Her” as examples of how to design movies creating a Los Angeles past and a Los Angeles future. Jeannine Oppewall (“Confidential”) and K.K. Barrett (“Her”) described their practices, which represented almost polar opposite strategies toward design. Oppewall, whose natural skill as a raconteur and an easygoing explainer of a complex craft is astonishing, stole the show. 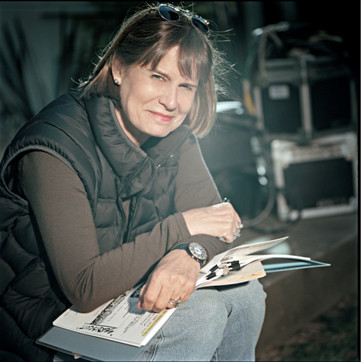 Her description of driving around Los Angeles with the movie’s location manager searching for the right 1940s-50s era buildings (“we were driving aimlessly north of Hollywood Blvd. and I suddenly yelled out, ‘Stop the car! Stop! Stop!’”) might go down as a classic tale of Los Angeles moviemaking. She created much of the “Confidential” design on paper with pencil and watercolors; Barrett made “Her” using digital tools, but the search for the right Los Angeles locations was no less difficult. (He also found a bunch of locales in Shanghai, which explains the movie’s futuristic look.) Oppewall, who has just finished as production designer for Warren Beatty’s new movie, explained to me that she debated with director Curtis Hanson on the use of homes for one of the bad guys in “Confidential.” In his masterpiece on the uses and abuses of Los Angeles in the cinema, “Los Angeles Plays Itself,” Thom Andersen critiques the movie for its use of mid-century modern design as a metaphor for evil, and this was Oppewall’s problem with Hansen’s preference for a mid-century mod home for the bad guy, since she preferred a Spanish-style abode in the tradition of “Double Indemnity.” She loves mid-century modern, and doesn’t associate with anything a bad guy might like. Hansen thought otherwise, and won the debate, but it reveals how a design choice can unpack all sorts of issues and prejudices.

The final piece of Day 4’s artist theme came in the form of the hysterically overrated “Frank,” this year’s example of the annual malady at the Sundance festival, where “Frank” premiered: Overhyping what’s mediocre. But soon after “Frank” and its lame absurdist comedy about the struggles of a marginal indie band were already fading in the mind, Jeannine Oppewall’s presence was growing stronger. “Los Angeles can be such a beige city,” she noted at one point. Living here almost my entire life, I’d never thought of it that way. But it’s kind of true. The best artists, like Oppewall, alter your perspective, make you see with new eyes or, at least, new colors.