Bombastic imaginations, bonkers juxtapositions, no attention to rules of deportment, and energy without limit.  It would seem that Hector Berlioz and Terry Gilliam are a match made.. well, somewhere .. but certainly for each other.

Following the wild and wooly success of his Damnation of Faust in 2011, Gilliam has trained his most particular talents on Berlioz’ 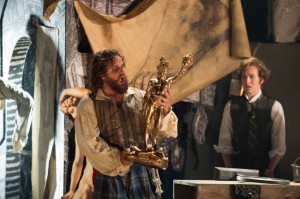 first rarely produced opera based on episodes from the life of the ultimate Renaissance bad boy: murdering, lying, thieving but preternaturally gifted sculptor, Benevenuto Cellini, who in the midst of carnival, court politics and turmoils of the heart must successfully cast his famous Perseus by a papal dawn deadline – or die.

Anticipation in the house at the English National Opera had the feel of an arena pop concert or sport championship as ENO music director Ed Gardner struck up the band. After a rousing overture, a homeless man pulled a bin across the stage and from its depths newspapers with screaming headlines of Cellini scandals were projected on the curtain/screen, then from sides of the wings and through the orchestra seats, Roman carnival in full flight:  sweeping banners, huge papier-mache masks floating up past the Dress Circle, confetti showering down from the ceiling, children, jugglers, tumblers, stilt-walkers, fools. Social order up-ended and it just went on from there. 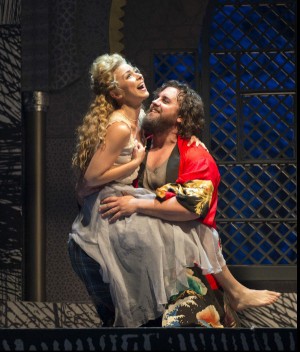 Terry Gilliam has always had a tendency towards collage – think back to those original Monty Python titles – and for someone whose visual library has far better stocked departments than her musical one, the unceasing fusillade of referencing threatened to overwhelm the music: Baron Munchhausen (balloons!), Tales of Hoffmann, Piranesi etched sets, maiden aunts garbed in the manner of Edward Gorey, Willard White’s diabolical and nimbly fey Pope Clement arriving as glittering southern Italian/Latin American icon, his guards prancing in the manner of the fashion show in Fellini’s Roma, commedia del arte, Arcimboldo and that’s barely scratching the surface.

The first featured role was nearly drowned out by the visual and musical pyrotechnics and Charles Hart’s libretto translation was a monster for mouths to get around, as many clashing consonants and syllables as Gilliam had ideas; and 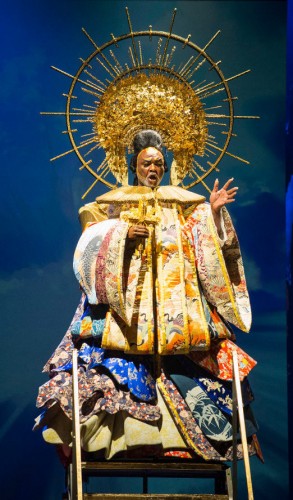 on opening night there was a definite feel that there was still development to be done in terms of coordinating the crashing waves of stage action to the glorious music emanating from the pit; but with the entry of Michael Spyres as Cellini, the artist as sweat-stained bruiser, railing at the heavens even as he loved and connived, fundamental fears were allayed.

With a voice equal to every extreme that Berlioz threw his way, the Missouri-born Spyres is headed for the operatic stratosphere; and he was very well supported by Corinne Winters as lady love Teresa, Paula Murrihy in the pants role of his sleaze-edged business manager Ascanio, and Willard White in grand voice as the Pope sans merci. It was a monumental thrill ride of an evening, with younger man Edward Gardner clearly the adult of the proceedings, spurring a vertiginous pace while keeping the vehicle firmly on track.

At the closing curtain, the giant legs of the completed Perseus are revealed to Pope and crowd in all their golden glory, surging upward to the perfectly coiled manhood of its groin, christened with a golden shower of confetti on stage and in the house, Gilliam’s last fitting commentary, joke and testament, with myself among others wondering when he’ll have at Wagner’s sacred Ring.