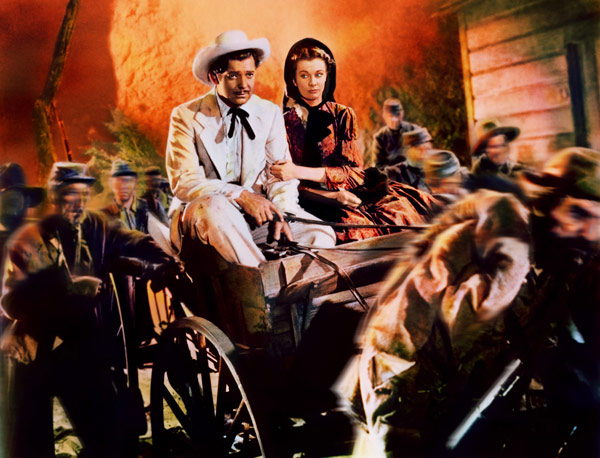 It’s almost a dare. A film festival, in this case TCM Classic Film Festival 2014, which virtually took over Hollywood Boulevard for five days this past May, declares, in its title, its focus on movie “classics.” Nothing but “classics.”

Really? Consider that perhaps a few of those “classics” are overrated.

Then consider that some are actually bad.

In the course of the fifth annual TCM Fest, this heresy entered my mind twice. I found two of the Festival’s most treasured “classics” not merely overrated, but not very good movies. Both are cinema landmarks, movies almost synonymous with Hollywood itself.

But as “Gone With the Wind” and “Stagecoach” demonstrate, being iconic and being overrated aren’t mutually exclusive. The films even undercut the widely accepted but rarely questioned notion that 1939—the legendary year in which both were released—was the greatest year in Hollywood history. 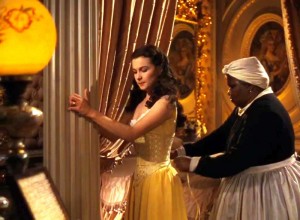 GWTW’s first of several huge problems is that Sidney Howard’s screenplay (diddled with by no less than Ben Hecht, among others, to no avail) is based on a lousy novel. That would be “Gone With the Wind,” by Margaret Mitchell.

Try reading it from cover to cover. Then see if you can resist the urge to throw it in the garbage. Not only does it never justify its narrative obsession with the openly malicious, mendacious and downright slimy manipulations and frozen immaturity of heroine Scarlett O’Hara (Vivien Leigh), but it turns flagrantly racist after the South loses the Civil War. The writing, often ridiculous, is stuffed with exclamation marks, horribly colloquial dialogue for “darkies,” and a habit of trying to have it both ways with slavery that’s as calculating and mean-spirited as Scarlett herself. Prime example: how Scarlett’s house slaves at Tara cannot bear to leave her for their freedom.

None of this (and more) gets solved in the movie; in fact it’s amplified. Although made by Northerners, GWTW may easily be viewed in the era of “Django Unchained” and “12 Years a Slave” as the movie that might have been made by an industry under the Confederate States of America, had it won the Civil War. (“Django” especially attacks the GWTW romance of the house slave, with Samuel L. Jackson as the male boot-licking counterpart to Hattie McDaniel’s ever-loving, obeisant Mammy.) As ideological propaganda depicting all Yankees as monstrous, it far surpasses Soviet-era movies depicting a corrupt and evil capitalist West and U.S.; there’s really no equivalent from Eisenstein and Pudovkin on through the Golden Age of ‘60s international Marxist cinema. 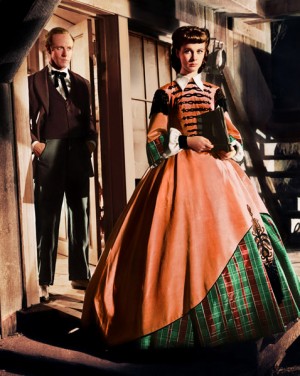 Worst of all, David O. Selznick’s production remains all too painfully faithful to Mitchell’s two-facedness regarding slavery and the Southern “cause”: Rhett Butler (Clark Gable) and Scarlett are both too self-involved to really show support, but will battle the Yanks when it gets down to it.

While the movie tends to skirt the book’s most virulent racist passages in its second half, it also turns deadly dull after the wartime sequences. Lugubrious and plodding, the second half’s domestic melodrama grinds on, with Scarlett continuing to cling to her ridiculous delusion that slave owner and Rebel commander Ashley Wilkes (an uninspired, burnt-out Leslie Howard) loves her. GWTW doesn’t even allow for the interesting possibility that we’re stuck with a madwoman for four hours. No. It actually expects us to root for Scarlett, even against the only interesting character in the bunch, Gable’s seductive Rhett Butler. 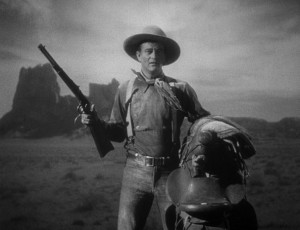 Like GWTW, “Stagecoach” sticks the audience with a bunch of clichéd and badly drawn characters (by writers Dudley Nichols and Ernest Haycox, with yet more diddling by Ben Hecht) and performances (care of director John Ford), except for one: John Wayne as Ringo Kid, the role that made him a star. Wayne saves “Stagecoach” from complete disaster, not only by his sheer charismatic force but because his character as an outlaw on a mission for just revenge is cast in interesting shades of gray, a precursor of the morally complex heroes of Anthony Mann’s James Stewart Western masterworks of the 1950s.

But Ringo is only one figure among several in this ensemble piece, and he has relatively little screen time. His arrival, a lone figure who first appears to be holding up the stagecoach traveling through Apache territory in southeast Arizona, is delayed for effect. But by this time, the movie is weighted down by a who’s who of shopworn Western stereotypes: the chatty, hard-working coach driver (Andy Devine, whose extreme limits as an actor are on ample display); the town drunk (Thomas Mitchell, a model for all actors on how not to play drunk); the hooker with a heart of gold (Claire Trevor, keeping her head above water); the fat, blustery banker (Berton Churchill); and of course, the stiff, mostly silent Indians.

“Stagecoach” is consumed by a series of scenes in which these characters gripe and grouse with each other before and during boarding the coach. None of these scenes is particularly inspired, many are corny and all tend to be overacted, with the exceptions of Wayne and Trevor. The key action sequence that, along with Wayne’s breakthrough performance, made “Stagecoach” a sensation in 1939 makes no sense: When Apache warriors finally catch up to the coach, clearly surrounding and massively outgunning the white folk, but hackneyed staging contrives to let the coach escape against absurdly impossible odds. The climactic shootout at night is a badly cut fantasy that inspired the false notion that gun duels in the middle of main streets were a common feature of frontier life: Such fights almost never happened, and the odd editing never lets the viewer see the full action, something Ford remedied decades later with Wayne in the fascinating and brilliantly edited nighttime gunfight in “The Man Who Shot Liberty Valance.”

Compare these choices, too, with Ford’s nuanced and precise direction of both action and a vastly superior ensemble in “My Darling Clementine,” and it’s clear how far he had traveled from 1939 to 1946. Even better, compare “Stagecoach” with Elmore Leonard’s novel, “Hombre” and the 1967 movie made from it starring Paul Newman, and it’s obvious how Leonard took “Stagecoach” as a useful template (put a motley bunch of folks on a stagecoach in dangerous Arizona country, and see what happens) but tossed out the clichés. Which, sorry for this viewer to report to TCM Fest, is most of “Stagecoach.”