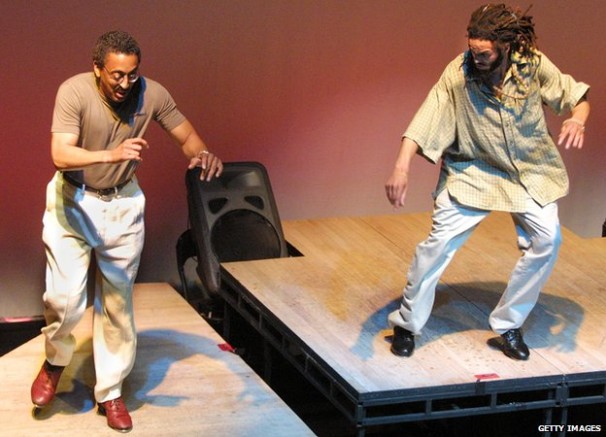 I’ve been paying attention to Savion Glover since he incandesced onto the theatre scene in The Tap Dance Kid at age 12. His level of virtuosity, enhanced by a cheeky grin and genuine joy at being up there just doin’ it! as impossible to resist as a warm sunny day (I live in London, remember). We were back in Nicolas Brothers territory with this boy, and Hines, Hines & Dad: brilliant shoes and smiles, taps at the speed of light, precocious inventiveness and show biz razzmatazz. 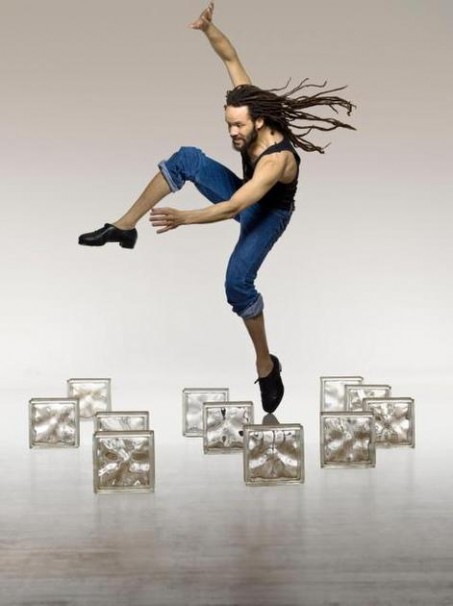 Kept watching him four years later when he appeared in Nick Castle’s film Tap, taking pointers from his mentor, Gregory Hines alongside tap legends like Jimmy Slyde, Harold Nicholas, and Sammy Davis, Jr. here abandoning Rat Pack glitz for the home territory of copasetic competitions and the sale of good-natured woof tickets.  Living history down on the good foot.  Bop to the beat and marvel. Then Broadway’s Jelly’s Last Jam in 1992, where the then 19 year-old Savion held his own tap-for-tap as jazz pioneer Jelly Roll Morton’s younger incarnation against Gregory Hines’ Tony award-winning Jelly as a man.  Sensational, feel good stuff aplenty.  No way not to watch without a smile. The combination of Gregory’s acting chops and dancing grace in a style that inhabited the rhythms of ‘70s and ‘80s popular music saved the dance form from relegation to total nostalgia for those unable to appreciate the artistry of slender, often elderly, black men moving stylishly in rhythm to that thing called jazz. But no one was prepared, three years later, when Glover, working with Jelly director George C. Wolfe, conceived Bring in ‘da Noise, Bring in ‘da Funk, a full-length history of the American black man told in tap.

As an antidote to the shuffling coons of minstrel shows and old Hollywood musicals, the fashion template of African-American tap has traditionally been elegant men in impeccably-tailored suits. Gregory had gone more casual, but in a loose-limbed Armani kind of way.  Gregory was always clean; but born, bred and still living in Newark, Savion moved into a different sensibility: the street. The righteous anger, beats, subversiveness, baggy clothes and baggier attitudes of hip hop underpinned Bring in ‘da Noise and with it, Glover tore up the rulebook of choreographed tap. He catapulted the art form into the 21st Century.

In the 20 years since, Glover has continued, not only pushing this aesthetic to ever expanding limits, but through his school and protégés as well as his performances kept this art alive,  all the while, and with humility, honoring it and his debt to those who showed him the way. “Sole Sanctuary,” his latest offering at Sadler’s Wells, is very much in this spirit. 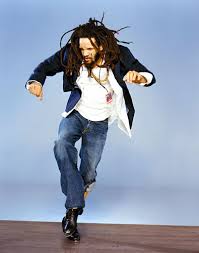 The set is spare:  a darkened stage, empty save for two small amplified dance platforms, the photo portraits of tap gods with mentor Gregory Hines in center pride-of-place hovering beacons in the gloom, a niche with an Asian meditative monk reinforcing that worship is being carried on here. The only words: an introductory loop of Hines testifying to what he gained from watching Jimmy Slyde, repeating as mantra. Glover appears in loose white and commences his own testimony in tap. Later joined by the slighter, grey-clad Marshall Davis, Jr., what is offered up is more percussion concert than knock-‘em-dead choreography; for Glover, with full intent and by his own admission, has long since left the “you ain’t seen nothin’ yet” razzmatazz behind. It’s what’s inside the sound that matters to him, its history and infinite spirituality.

Which is not to say that the dancing isn’t astonishing. It is, in spades; but the emphasis is in what metal-tipped feet can create in sound. We are taken on a journey that counterpoints the American jazz-based specialties of Glover’s tap forefathers with the percussive story-telling of West Africa. One could hear the summoning and answer of orishas. Though very much a tap star in his own right – and taking some solo turns to display this – Davis is an accompanist here, he feeds Glover in the same manner and on the level as the most accomplished pianist in duo-form classical sonatas. Rhythms parsed and played with, rhythms from all over including, to my mind, the dribbling of basketballs on the concrete urban courts on which Glover has played  throughout his life.

Not for those looking for aerial leaps, dropped splits and radiant smiles, then, but for others of us: let the church say “Amen.”