TCM Fest: The rise and rise of digital restoration 1 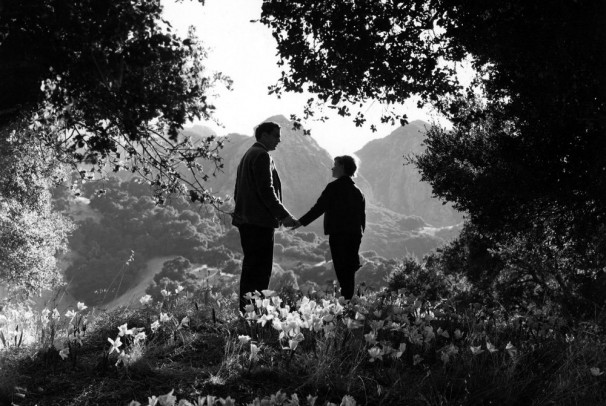 Last weekend’s unveiling of seven digital restorations (five of them world premieres) at the fifth annual TCM Classic Film Festival came at an interesting moment. I saw four of them, and had previously seen a fifth, Hitchcock’s half-silent/half-sound 1929 “The Lodger,” at LACMA’s “Hitchcock 9” program. It was impossible to see all of them due to the festival’s curious programming which set some against others in the same time slots, and so I missed “Mr. Deeds Goes to Town” (Sony Pictures’ restoration from the original negative) and “Stormy Weather” (the world premiere of 20th Century Fox’s restoration reconstructed from the original composite fine grain nitrate master camera negative). 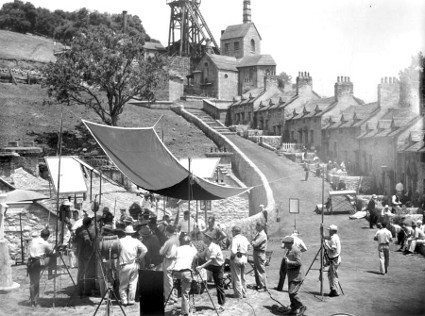 For no clear reason, TCM Fest isn’t known for showcasing restorations. That may be because  long-standing major showcases Il Cinema Ritrovato in Bologna and UCLA Film and Television Archive’s Festival of Preservation here in Los Angeles dominate the  international conversation on the preservation front. Besides, TCM Fest has been framed and promoted as a celebratory survey of Hollywood’s greatest movies, and tends to be viewed as a wonderful nostalgia event. (Despite the opportunity to see what may be the greatest digital restoration yet, with “How Green Was My Valley,” the main reason for the mob scene at the El Capitan Saturday was a live appearance by Maureen O’Hara.)

But as the stunning work on “How Green” demonstrates, TCM Fest should be playing an important role in theatrical presentation of new digital restorations. For one thing, the movies are presented in cinemas that are frankly more stunning than any in Bologna or (as fine as is the Billy Wilder Theatre) at UCLA. “Double Indemnity” and “A Hard Day’s Night” in the TCL (nee Grauman’s) Chinese, “Godzilla” in the Egyptian, “How Green Was My Valley” in the El Capitan—these are literally palatial settings for such projections. Not even the 2 and 4K digitized restorations premiered in Cannes’ “Classics” section get such a grand presentation; that typically fine program is usually shown in the Salle Bunuel, one of the festival’s smaller houses in their main Palais complex.

It’s the timing, as I mentioned, that’s even more interesting. Cinephile chatrooms and Facebook discussions have been churning conversation about whether restored movies are better in digital or 35mm. Until recently, the winner was generally 35. This was pretty obvious time and time again at viewings at UCLA, for instance, which showcased phenomenal results from the hands of their own preservation team (led by Robert Gitt) as well as such centers as George Eastman House, Cineteca di Bologna and Vienna Filmmuseum.

But in recent discussions, some led by director Monte Hellman (who’s currently working on digital restorations of “The Shooting” and “Ride in the Whirlwind” for Criterion), digital is trumping 35. Just as the digital image has been improving in terms of image resolution, richness and texture for new movies in recent years, the same advances are visible with digitized restorations.

Hellman just wrote a fascinating post on April 9 about his color correction work on “The Shooting,” and how he discovered that the 4K digital transfer from the original negative contained “at least twice the [visual] information” as the 35mm print. He added: “It’s not possible for any [35mm] print to be as good as a Blu-ray made from a 4K transfer.” The results, Hellman added, mean that those who’ve previously seen “The Shooting” have “never seen this movie before. I’VE never seen this movie before.” 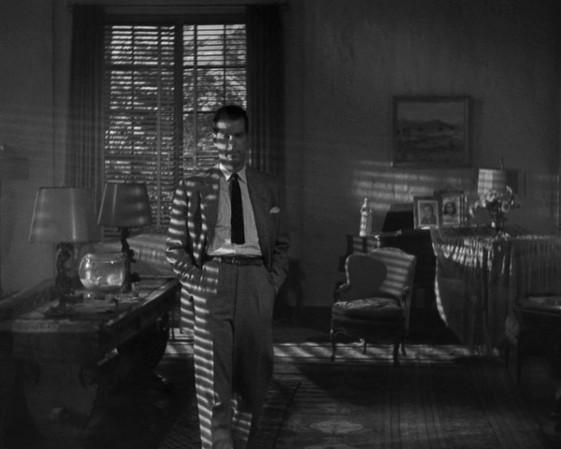 PausePlayPlayPrev|Next
His reaction to his own work rebounded in my mind as I watched “Double Indemnity” in the (let’s just call it) Grauman’s. In an early scene, Fred MacMurray arrives at Barbara Stanwyck’s Hollywood Hills home and is told to wait downstairs. Co-screenwriter Raymond Chandler’s narration vividly describes must and smoke in the air of the living room, something I’d never seen in my numerous viewings of this early noir masterpiece. Now, in this new digitized restoration, there it was, dust thick in the air.

And this conclusion: It had always been there, but it took this restoration, with the latest digital tools, to reveal the previously invisible.

That’s not all: MacMurray walks through the living room, and absent-mindedly sprinkles some fish food into a goldfish bowl. Even in previous big-screen projections, I’d noticed him doing something for a moment over a table, but could never make out goldfish. Now, his fingers, the fish food, and the individual goldfish, all in exceptional clarity. 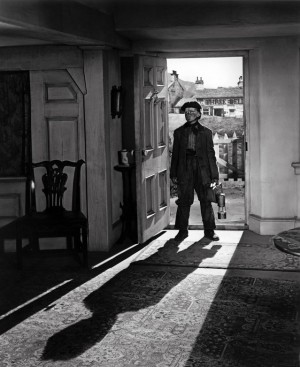 The “How Green Was My Valley” projection revealed a different factor pointing to a total transformation underway with restorations. The example of “Double Indemnity” points to digital’s obvious high-resolution benefits, but depending on the filmmakers’ aesthetic intentions, high-resolution isn’t always desirable or relevant. Cinematographer Arthur Miller, working with director John Ford on “Valley,” created one of the landmark cinematography achievements in the same year (1941) in which Gregg Toland and his director Orson Welles made astonishing advancements with “Citizen Kane.” (Both brilliantly experimented lighting interior sets with visible ceilings in the shot, fairly unusual until then.)

The new “Valley” restoration shows Miller pushing the possibilities of light as far as Toland. His stunning exteriors often used the illusion of the sun as a direct lighting source, but the new version shows how thoroughly Miller had worked through this technique, resulting in an effect of painting with light as heightened as any Hollywood movie.

Some cynics could be heard commenting, during TCM Fest, that the announcement of the world premiere restorations was self-admiring publicity. This is wrong. Right now, we’re experiencing cinema at the end of film. When the history of our current remarkable period of restorations is told, TCM Fest’s cluster of restorations may be looked upon as a key moment, a turning point, as 35mm gives way to digital cinema.

One comment on “TCM Fest: The rise and rise of digital restoration”