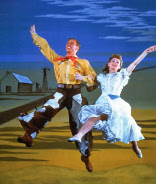 Platt originated the role of “Dream Curly,” a dancing doppleganger to the dramatic actor who plays the same role — the dancer picks up the plot line in choreographer Agnes deMille’s acclaimed “dream ballet” sequence created for the 1943 Broadway production of OKLAHOMA!.

In Hollywood’s 1955 movie version, Platt appears in a dancing/speaking role as one of Curly’s pals. He is the cowboy friend who buys Curly’s saddle for $10 at the auction. He comments that Ado Annie’s sweet potato pie gave him a ‘three day bellyache.’ Platt’s is a major presence in the gang of cowboys, and his thatch of red hair adds delight to the mix. 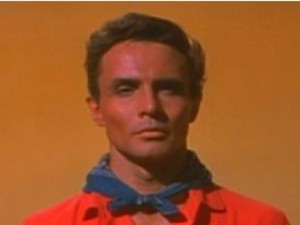 James Mitchell (b. Sacramento, California, Feb 29, 1920) is the only modern dancer who went on to a successful career as an actor. With dark, handsome looks, wonderful speaking voice and imposing masculinity, Mitchell arrived in films just as they were transitioning from sunny musicals of the ‘30s and ‘40s to the more honest cinema of the ‘50s. 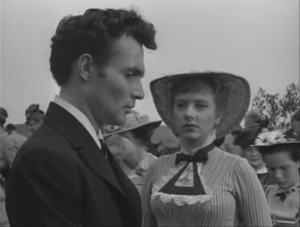 Neither a singer nor a cheerful, non-threatening hoofer, Mitchell danced and acted with passion and sensuality. Although he played several minor film roles under contract to both Warner Bros. and M-G-M (usually as Latino cowboy, Native American or gangster) in Colorado Territory, Border Incident and The House Across the Street (’49), Stars in My Crown, The Devil’s Doorway (’50), his dance talents probably confused the front office and his film possibilities were never fully explored.

As Mitchell aged, he grew more appealing and his “presence” intensified. It was innovative choreographer/director Agnes de Mille who understood — and used — Mitchell’s male power to advantage in her Broadway work and Dance Theatre pieces. He became the quintessential de Mille male dancer, and also the choreographer’s assistant and inspiration for more than 25 years.

Mitchell graduated in Theater Arts at Los Angeles City College at 19. A friend suggested he take a dance classes to further his theatrical training. “Little did I suspect what a few classes would lead to. I found myself taking a class from Lester Horton and then a second class, a third class, a fourth class and so on, until I somehow became integrated with that company. But it wasn’t too mysterious, I’d finally found a family,” said Mitchell in his presentation of the Dance Magazine award to Bella Lewitsky, July 1978.

His new-found passion for dance sidetracked his acting career and he became a leading dancer with Horton’s Dance Theatre, appearing with the group in concert, films (White Savage ’43) and at such diverse venues as Earl Carroll’s Hollywood nightclub and the Folies Bergere in New York. Horton was also influential in getting him his first acting roles in 1943’s Phantom of the Opera and Bordertown Gun Fighters at Universal where Horton was dance director.

After one year in the U.S. Army, he went to New York and auditioned for de Mille, for her production of Bloomer Girl (1944). His impact was described in No Intermissions by Carol Eaton:

“The war had drastically curtailed the supply of male dancers, but one young man who showed up for the audition immediately caught Agnes’ interest. At twenty-five, James Mitchell had the look and quality of a young Hugh Laing — dark and mysterious, with a beautifully chiseled face. Unlike Laing, Mitchell was well mannered, totally professional…He had very little ballet technique (he would later acquire it), but he had a powerful stage presence and physical strength that belied his slight build…At the audition, deMille offered him a job on the spot. Within three days, he was her assistant and lead dancer.”

Mitchell himself is quoted in the same book:

“I was young, I was good-looking; the body seemed to be able to wrap itself around a particular movement. I had studied acting in college, so I understood what contact with the audience meant. I could create an atmosphere. There were a lot of dancers who could dance circles around me as far as technique went, but I seemed to be able to hold the stage when I walked on.”

Ballet training strengthen his technique which, to this point, was Horton-based modern dance. His next Broadway show was Billion Dollar Baby (’45, choreographed by Jerome Robbins) and he returned to working with de Mille in 1947 in the featured role of “Harry Beaton” in Brigadoon. His performance earned him a Donaldson Award and Theatre World’s “Promising Personality” honor. Ironically, when the property was filmed by M-G-M in 1954, Mitchell did not recreate his role. It was played by the aforementioned Hugh Laing, whose Sword Dance (the reason to use a dancer in the role in the first place) was edited from the final release. Mitchell’s powerful and brooding performance in Brigadoon also earned him a contract with Warner Bros where he had roles in Colorado Territory and House Across the Street in 1949. He appeared as guest star with ABT in Rodeo in Weisbaden, Germany 8/14/50. 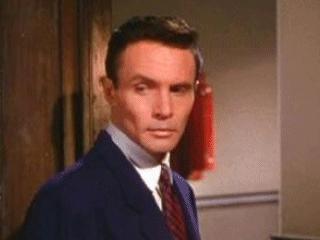 He was then offered a contract by M-G-M in 1950, first playing an acting/dancing role in The Toast of New Orleans and then ethnic roles in the westerns Border Incident, Devil’s Doorway and the drama Stars in My Crown. Although he now preferred acting to dancing, when challenging film roles did not materialize, he joined Ballet Theatre for their tours to Europe and South America in 1950 and was back on Broadway in de Mille’s Paint Your Wagon (’51), in which he broke his foot during the strenuous performances.

While recuperating, he returned to M-G-M to play Cyd Charisse’s choreographer-boyfriend in The Band Wagon, a role which required a sense of dance but no physical demands. In 1953, he returned to de Mille’s Dance Theatre and was described in a Dance Magazine April 1954 review as “proud and deeply human.” He returned to M-G-M to partner Cyd Charisse in “One Alone” from The Desert Song, a sequence that remains one of the most sensuous in movie musical history in Deep in My Heart and had a major acting role (as a mute slave)  in The Prodigal (both ’55). His only starring movie role was in the Western The Peacemaker in 1956. 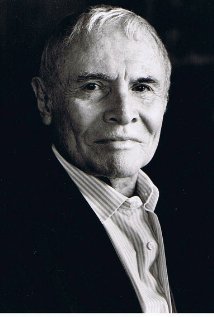 His acting and singing talents led to non-dance roles on Broadway in The Three Penny Opera (’54 Off-Broadway revival), Livin’ the Life (OB ’57), First Impressions (’59) Carnival (’61), The Deputy (‘64), and Mack and Mabel (’74). Mitchell’s multiple television appearances began with featured dance appearances on de Mille’s works on “Omnibus” (’52), “The Seven Lively Arts” (’57) and partnering Cyd Charisse on her specials in 1959 and 1963, and continued with roles in most major dramatic television series.He explored his choreographic talents assisting de Mille on several shows and the film version of Oklahoma! (in which he also appears as “Dancing Curly”), and collaborated with Gower Champion on the 1977 Annie Get Your Gun  revival with Debbie Reynolds. Other non-musical films include Slogan (’69), The Spook Who Sat by the Door (’73), Laura (AKA Shattered Innocence – ’79) and What Waits Below (’84) and The Turning Point (in which he played a Jerome Robbins-inspired choreographer in 1977). 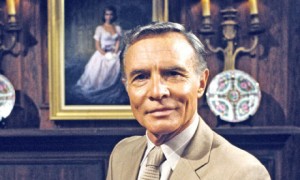 This unique actor-dancer would finally gain his greatest recognition for his appearances on TV soaps: “Edge of Night,” “Where the Heart Is” (’69) and as “Palmer Cortland” on “All My Children” from 1979 to 2010. He taught theater arts at Yale, the Juilliard School and Drake University in Des Moines, Iowa, where he also received an Honorary Doctorate in Fine Arts. Other degrees included a bachelor’s degree from Empire State College and a Masters degree from Goddard College in Vermont.

One comment on “James Mitchell, who danced “Dream Curly” in OKLAHOMA!”