TCM Classic Film Festival 2014 opens Thursday April 10, 2014, with a screening of “Oklahoma!” at Grauman’s TCL Chinese Theatre. Shirley Jones, the film’s star, will be honored. Let’s learn about “Oklahoma!”‘s great choreographer who transferred groundbreaking stage choreography to the screen in 1955. 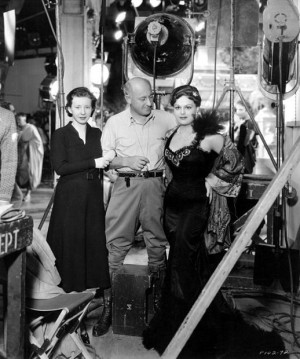 A consumate storyteller who used words and dance to powerful effect, Agnes deMille’s choreography for ballet and the musical theater revolutionized dance worldwide with extension of plot and character and stylized, bold steps.

Daughter of screenwriter/director William DeMille and niece of iconic filmmaker Cecil B., Agnes moved from Harlem to Hollywood when she was nine and grew up amidst the early film industry, appearing in the 1930 Publix short The Ballet Class and her father’s The Faun. 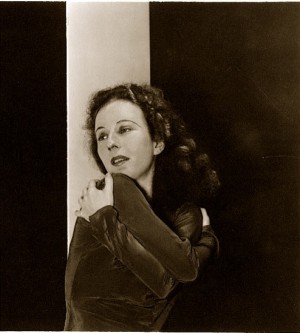 She first studied dance with Theodore Kosloff, the Ballets Russes exile-turned-movie actor who was a member of Uncle Cecil’s silent movie coterie and a family friend. She continued studies with Margaret Craske and Marie Rambert. After receiving a degree in English at UCLA, Agnes returned to New York and began her professional dance career as a soloist in concert in 1927, touring America and Europe. In 1928, she danced on Broadway in The Grand Street Follies and created her first choreography for a revival of the legendary musical The Black Crook in 1929 in Hoboken, New Jersey. While touring Europe in 1932 with her concert program, she met and studied with Anthony Tudor; together they formed a company. After her return to America, Uncle Cecil let her try her talents by choreographing the dances in Cleopatra (’34) – although he fired her from herself dancing in the film. 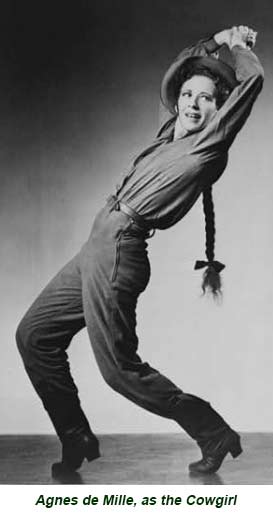 deMille (who spelled her name differently than did her uncle, who used DeMille) made her ballet-choreographic debut with Black Ritual for Ballet Theatre. Specializing in creating ballets based on American themes, her work revolutionized the musical theater form, on Broadway, with Oklahoma! (’43) when her choreography revealed the psychological depths of the characters and extended the plot. After Oklahoma!, many stage musicals contained a “Dream Ballet” in an attempt to achieve what deMille did – without the benefit of her genius.

She was among the first to use the term “Choreographer” as her credit and became a director-choreographer on the Broadway stage with Allegro in 1947. Due to her phenomenal success with Oklahoma!, she was often announced as “signed” for films (Where Do We Go from Here?, etc.) but because of marriage and her successful stage and concert creations, her work did not reach the screen again until 1955, with the film version of Oklahoma!

Along with her ongoing 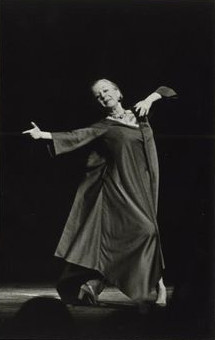 struggle for the recognition of choreographers and the importance of their contributions, she was elected the first president of SSDC, formed in 1965. She was honored with the Dance Magazine Award in 1956, the Capezio Award in 1966, the Kennedy Center Honors in 1980, the White House National Medal of Arts in 1986, the Mr. Abbott Award in ‘87 and a special Tony award in 1993. After suffering a major stroke in 1975, deMille continued to lecture and write, as the author of thirteen books that chronicle the development of dance and theater in America in her time. Her final book was The Life and Work of Martha Graham (’91).

In a 1987 PBS documentary about her life, Agnes deMille stated: “I would like one word on my tombstone: dancer.”

Biography: The DeMilles, An American Family by Anne Edwards (1988), No Intermissions by Carol Easton (1996)