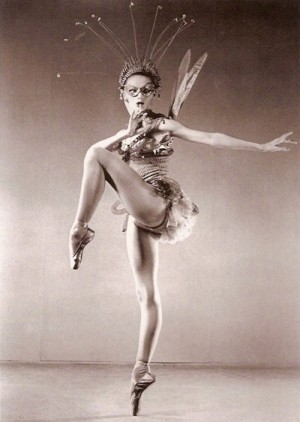 We are so looking forward to Dance Camera West‘s special screening of “Afternoon of a Faun” at the Aero Theatre next Thursday evening, co-presented with the American Cinematheque.

I will be interviewing Nancy Buirski, the documentary film’s director, after the screening. It portends to be an amazing event, mixing and matching a crowd of dance and film folk.

Le Clercq, the coltish ballerina seen at right, was muse to both George Balanchine and Jerome Robbins. She was a splendid dancer and a mid-century icon of a high-spirited, free woman.

I was touched to hear a story that reveals another dimension of Le Clercq, who despite her own personal tragedy — she was crippled by polio at age 27, this the subject of Buirski’s documentary — remained dedicated to her art form.

A note arrived from Tom Mossbrucker, the former Joffrey Ballet principal dancer and for the past seventeen years artistic director of the adventurous Aspen Santa Fe Ballet.

Did we ever tell your our story of Tanaquil? When we first started the company (then the Aspen Ballet Company), we licensed Balanchine’s Valse Fantasie. It’s interesting how the Balanchine Foundation works, since he left many of his ballets to his ballerinas, you actually write the check to the owner of the ballet, and Tanaquil owned Valse Fantasie.

We wrote the check, performed the ballet. We were so proud, it was our first (of four) Balanchine ballets! A few weeks later we received a beautiful handwritten note from Tanaquil, with a donation in the amount of $3000 (the price of the ballet). It was only our second or third season, so $3k was a huge donation for us. We were blown away, and never forgot her kindness. It was the true spirit of Balanchine, helping a young company get off the ground.”