Getting back to Ballet Black 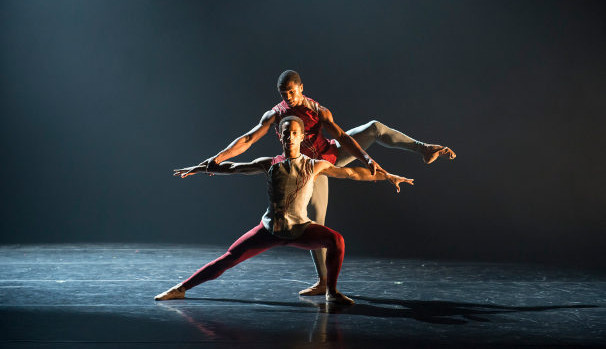 Now in its 13th shoestring-budgeted season Ballet Black’s chamber ballet company of eight has a reputation of performing far beyond its weight class. Its current mixed program, performed at Linbury Studio Theatre of the Royal Opera House, continues in kind.

The creation of young Trinidadian-British Cassa Pancho to provide role models to aspiring young dancers of color, BB has been a magnet for world class and innovative choreographers eager to work with its strong and capable dancers; and for me one of its appeals is that their material and the music to which it’s performed is not about ethnicity but about dance itself. Which is not to say that the reason for the company’s existence is ever too far from the mind of a seasoned cultural warrior such as myself.

The opener, “Limbo” to the music of Hindemith (pictured above), was described by its choreographer Martin Lawrence as the back and forth struggle of a soul between the states of life and death; but in the eloquent agon-istic interpretation of BB’s “prima” (and Dance Theatre of Harlem refugee) Cira Robinson, Jose Alves and Jacob Wye I could not help but think of the stairs that separated the dark-complected BB dancers in the Opera House’s experimental space from the Royal Ballet’s performance of Sleeping Beauty in the main hall as its own kind of River Styx. Just what will it take for more such accomplished dancers of color to penetrate mainstream Petipa dreams?

I was referencing color once again in Christopher Marney’s “Two of a Kind” with the spritely Kanica Carr and Sayaka Ichikawa – their yellow-toned complexions enhanced by crisp yellow dresses – exploring the whimsical lyricism and confu-sions of young love with the far taller and darker Christopher Renfurm and Damien Johnson (also a DTH alum) to the music of Tchaikovsky and Ravel. Here color not hindrance but, to my mind at least, a wittily employed tool in the com-pany’s artistic repertoire. 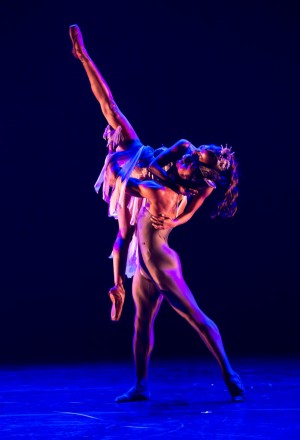 My personal color preoccupations were shown the door by the evening’s main event: South African-born Arthur Pita’s “A Dream Within A Midsummer Night’s Dream.” Bracketed by the formality of Handel’s Sarabande of Barry Lyndon fame, “Dream” quickly fragmented into cheeky commentary and alternatives to Shakespeare’s already alternative reality offered to Eartha Kitt, Yma Sumac and Barbra Streisand singing snippets of the American Song Book. Given the absurdity of their suiters, doesn’t it make more sense that Hermia and Helena (Carr and Ichikawa) find their souls’ mates in one another? Johnson’s Oberon becomes besotted with Wye’s Lysander (though until I checked the program I thought it a cogent explanation of the Fairy King’s obsession with the Indian Boy) while Robinson’s Titania makes tender, impassioned love to the Bottom of Alves. All this conjured by the ambi-sexual mischief of Isabel Coracy’s Puck conceived as a floral bearded Boy Scout.

A lovely evening. May they go forth and prosper!