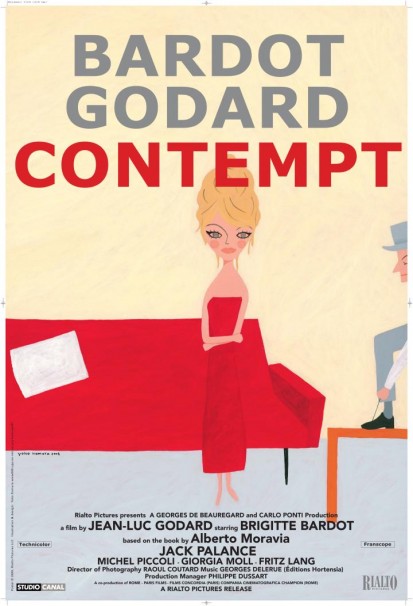 Contempt: That’s what ex-typist Bardot has for husband, the  playwright / screenwriter Piccoli—but why? Does she think he used her to get that lucrative assignment (to rewrite an adaptation of The Odyssey) from overbearing American producer Jack Palance?

Godard, given international stars, a best-selling novel by Alberto Moravia, two high-maintenance producers (Joseph E. Levine and Carlo Ponti), and the biggest budget of his career, succeeded in overturning the conventions of mainstream film making. The result figures as Godard’s most sun-splashed production, unfolding amid the airiest and most fabulous of apartments and villas, and against dazzling seascapes, with a complex color scheme featuring a retina-searing red – always the same shade – on robes, railings, convertibles, etc. And with Godard himself as Lang’s assistant director in the final scene.