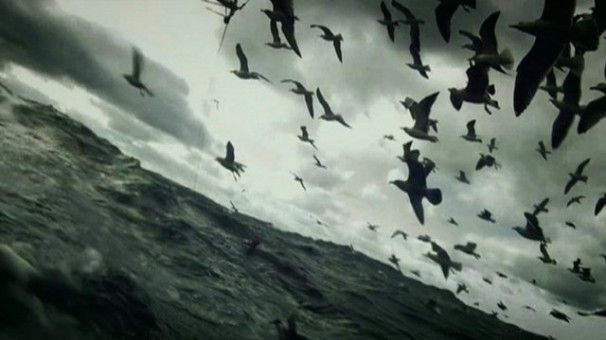 The 2013 year in movies followed the pattern of most years: 90% of theatrical releases are instantly disposable; a good year can be gauged if this percentage drops to the 80 percentile, or notches up into the higher 90s in a bad year.

This year was average.

Almost all of the movies on our ‘best’ list are the work of one or two creative brains. Notable (for me) is the unusual number of American movies, including the year’s greatest, “Leviathan,” Lucien Castaing-Taylor’s and Verena Paravel’s mindblowing, eye-popping venture on the stormy Atlantic with a fishing crew and a whole bunch of extremely small and mobile cameras, expanding the possibilities of non-fiction cinema from content to sound and everything in between.

Other superb American non-fiction peppers the list, including the epic “At Berkeley,” Frederick Wiseman’s dispassionate yet moving look at the state of the U.S. university through the prism of UC Berkeley, and “Room 237,” Rodney Ascher’s wildly entertaining compendium on how Stanley Kubrick’s “The Shining” has inspired various obsessives to craft sometimes smart, sometimes wild theories and readings.

Indeed the American showing this year was remarkable, ranging from “Inside Llewyn Davis” and “American Hustle,” the year’s best comedy, to “Gravity,” the studio movie of the year and a triumph for Sandra Bullock and director Alfonso Cuaron. There were a fantastic array of radically independent works: Shane Carruth’s elliptical “Upstream Color”; “Computer Chess,” which like so many here that slip-slides between fiction, semi-fiction and something like semi-non-fiction, all in glorious black & white analog video; and another ‘in-between’ movie, Jem Cohen’s lovely and tender “Museum Hours,” about a budding relationship between a thoughtful Viennese museum guard and an inquisitive foreign visitor.

This in-between-ness was pushed even further with such dazzling work as “The Last Time I Saw Macao,” from the always inventive and surprising team of Joao Pedro Rodrigues and Joao Rui Guerra da Mata and Valerie Massadian’s disturbing Locarno-winning tale of a little girl and her mother, “Nana.”

2013 was also a year with a little bit of everything from red-hot angry storytelling (Jia Zhangke’s ambitious and violent masterpiece, “A Touch of Sin”), wild black comedies (“Sightseers,” with director Ben Wheatley and company doing stuff not even Monty Python would’ve considered) to period political comedy (Gael Garcia Bernal at his career best as a political media operative in Pinochet’s Chile in “No”), and revivals of directors I wouldn’t have believed could have it in them: Michael Bay pulling out all the stops in the hilarious “Pain and Gain” and the welcome return of Wang Xiaoshuai to his early career brilliance with the powerful memoir, “11 Flowers.”

This list of 20 is the cream of a bigger group. It’s enough to make you forget the other 90%.