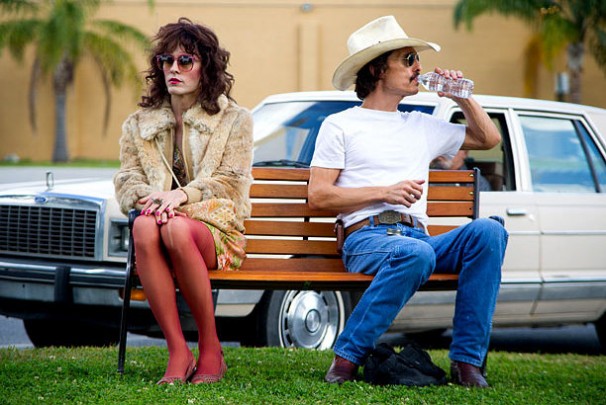 Gladwell describes several cases of underdogs discovering their untapped strengths or advantages. “Dallas Buyers Club” takes Gladwell’s thesis into the stratosphere of high entertainment, tracing the incredible but true story of Texas bull-riding competitor Ron Woodroof battling the American medical establishment when diagnosed with H.I.V. in 1985. Woodroof, the David, creates an underground network of internationally available but domestically banned drugs, hounded by the FDA, IRS and the local Dallas hospital—the combined Goliath–where he had received treatment.

But this outline doesn’t remotely suggest the sheer bliss of the movie’s storytelling irreverence. Written and nursed by (first) Craig Borten, who interviewed Woodroof weeks before he died, and (second) by co-writer Melisa Walack, and supported through its long two-decade development by producer Robbie Brenner, the movie is shot through with a purely American sense of political incorrectness, justice and ballsiness.

And that attitude gets its voice and body in the shockingly shriveled figure of Matthew McConaughey, who’s likely having more fun per on-screen minute than any other movie actor these days. Look at McConaughey in his last movie, as a desperate fugitive in Jeff Nichols’ Hemingwayesque “Mud,” and look at him here: His body has lost more than 40 pounds, his character still single-minded, but now a semi-comic hero caught in wild cultural crosswinds. McConaughey’s Ron is a cussing, beer-swilling homophobe cowboy who finds that his closest allies are those he thinks he hates.

Yet neither McConaughey nor Quebec-born director Jean-Marc Vallee want to coddle audiences by making Ron a vehicle for a Saul-to-Paul transformation. He’s a throwback to the kind of anti-hero that fascinated Robert Altman, a guy you might inch away from in a bar but who seduces—like Elliott Gould’s gambler in “California Split” or Marlowe in “The Long Goodbye”—with his cocksure personality. Mark Twain would’ve loved this guy.

Vallee directs with Ron’s brand of chutzpah, immersing himself in American rebelliousness much like his previous three features were branded with Quebecois (C.R.A.Z.Y.), British (The Young Victoria) and French (Café de Flore) flavor. He picks up on Altman’s game of letting some extraordinary, sometimes underrated actors loose, such as Jared Leto as Ron’s charming cross-dressing yet self-destructive pal in the underground AIDS medicine network or an unrecognizable Griffin Dunne as a renegade doctor working in Tijuana.