Brando’s bead on jazz in “The Wild One” @ L.A. Jazz Institute festival 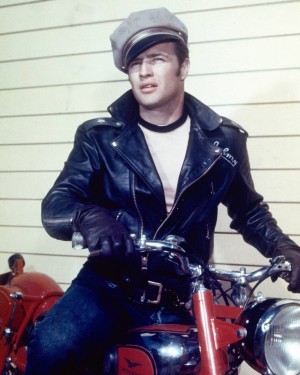 We so enjoyed the opening-night  concert of “Jazz Themes from Hollywood: West Coast Jazz at the Movies,” a four-day festival sponsored by the LA Jazz Institute now going on in a big subterranean ballroom at the LAX Marriott hotel.

The concert paid tribute to the film music of Shorty Rogers and Leith Stevens, alternately composers and arrangers for the sound score for THE WILD ONE (1953), Marlon Brando’s huge break-out movie.

With its moody musical backdrop, the film was a groundbreaking propagator of a new Hollywood genre: the rebellious teenage drama. The sound of the film, like its look, was all-California. 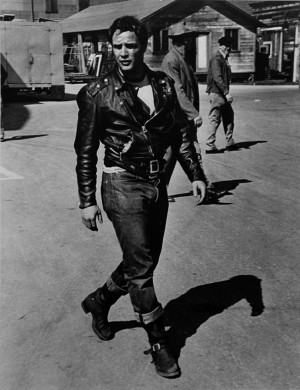 A 10-piece jazz ensemble delivered the evocative scores, bereft of their intended visual cues. In other words, a movie music concert without the movie.

Trumpeter Carl Saunders led the band  through “Blues for Brando,” “Wild One First Juke Box,” and Rogers’ other themes from the movie. It was all top-notch in its serious intent and its delivery.

“I played for him [Shorty Rogers] at parties,” explained Saunders, an able bandleader who himself delivered scorching staccato horn licks.

“He was a great writer, the kind who could [scribble music] in the back of a car.”

“Kind of hip,” Saunders summed it up.

Brando himself pushed for the Rogers orchestrations, according to Saunders.