Around the world with Enzo Avitabile 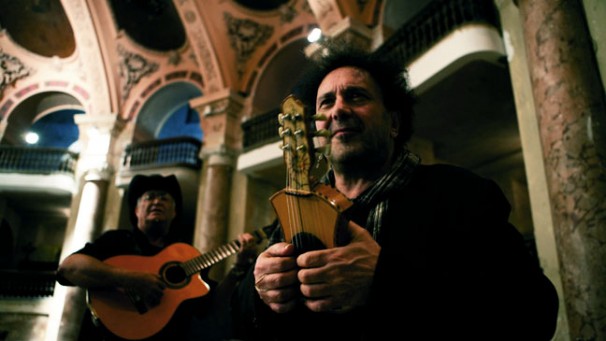 One of globalization’s least noted benefits has been the rise of world music, led by a motley crew of legends ranging from Peter Gabriel and Mickey Hart to Djivan Gasparyan and Enzo Avitabile. Drums and frets form the basis for the cross-cultural exchanges, even though an artist like the Naples-born Avitabile is a singer and reed player. Filmmaker Jonathan Demme’s modest little portrait, “Enzo Avitabile Music Life,” (opening today at Laemmle’s Royal and Playhouse 7) continues the director’s interest in world music and its tributaries, this one taking him far away from Demme’s haunts in Haiti or alongside Neil Young.

Avitabile reveals only late in the movie that his roots are in jazz (from Sidney Bechet to John Coltrane), but they can be detected in his various, intimately filmed performances with a galaxy of world music stars, ranging from drummer Trilok Gurtu to Gasparyan to Luigi Lai (master of the astounding ancient reed instrument, the launeddas) to Persian tar player Hossein Alizadeh. The “documentary” bits inserted between the performances are ephemeral and close to sloppy, and Demme seems disinterested in exploring Avitabile’s personal commitment to the social justice themes that comes through in his topical lyrics.

The music, in this case, is just strong enough to speak for itself.