The Hollywood Bowl’s historic band shell, the object of community affection as well as architectural dispute over the years, gets an ultimate homage when Diavolo Dance Theater installs its own version, a huge fiberglass replication, on the huge stage. It’s part of the September 5 world premiere of “Fluid Infinities,” performed by the architectural movement troupe paired with the Los Angeles Philharmonic. 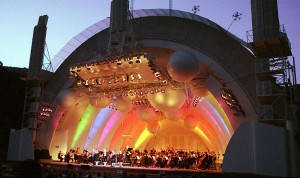 The dance-party for 18,000 (seats at the Bowl!), directed by Diavolo founder Jacques Heim, will restore dance to a prestigious venue where so much dance history has taken place.

The acrobatically inclined dancers, all wonderful performers, cavort on this mini dome of their own making. Our local big band, the Phil, will accompany with Philip Glass’s lovely Symphony No. 3. 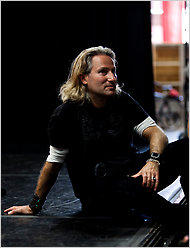 As the curving structure rotates and reveals itself, dancers splay, adhere, and flatten on its surfaces. They then finesse through its Swiss cheese holes, sometimes wriggling, sometimes swooning backward. Clad in futuristic unitards that also resemble swaddling clothes, they decorate the thing, venturing in time and space and mixing gravitas into gymnastics. 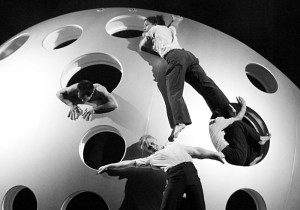 The diabolical Diavoloeans, faces shocked as in cartoons, get sucked into the bowl’s holes, disappearing hocus-pocus. Joints melt magically as knees and elbows get enveloped through openings where, by all human experience, they should not fit. It’s cinematic — the film spools ahead and then reverses. The dance vocabulary of Fluid Infinities basically “sucks” — but in a good way.

Support dance at the Bowl! Tickets start at one dollar. So, go.

Music by Glass, Dance by Diavolo | The Hollywood Bowl | Sept 5