The temerity of Tamara, at Golden Legend Gallery 1 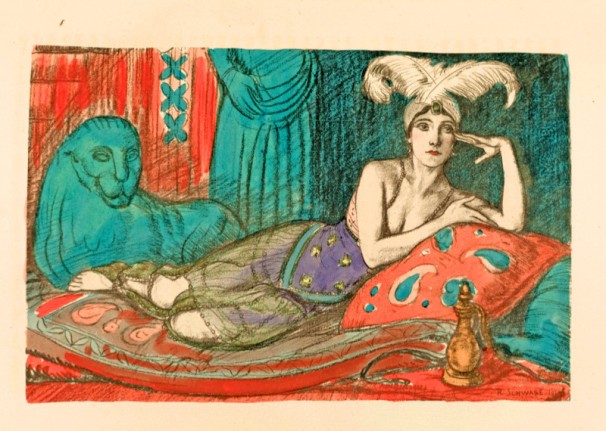 We recently heard from arts·meme friend, Gordon Hollis, proprietor of Golden Legend Gallery in Beverly Hills who alerted us to a unique print in a rare book he is handling.

Svetlov, Valerien. Thamar Karsavina. London: Beaumont, 1922. First edition. No. 16 of 120 copies, specially signed by Karsavina, with hand-tinted illustrations, and specially bound in quarter vellum with decorations in gold on the spine (there were also 230 regular copies, unsigned). Small folio. 149pp, with color frontis. 16 plates, some in color, and 15 camera portraits. Light wear to tips of corners, essentially fine.

According to Gordon, this is the first biography of Tamara Karsavina, the prima ballerina for the original Ballets Russes. Svetlov’s text provides a full portrait of the dancer at the height of her career. Many of the illustrations feature the dancer in costume for her famous roles and are unique, difficult to find elsewhere.

Karsavina’s harem setting (her Odalisque presentation above) is emblematic of the Orientalia that the Ballets Russes disseminated in its heyday in Paris. A prime example was Michel Fokine’s “Scheherazade,” in which Karsavina was partnered, as well as romanced, by Theodore Kosloff. 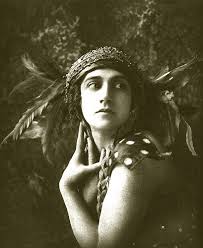 I asked Gordon about the process on view in this image. It’s called a pochoir print (some beautiful examples here), it’s a kind of French silk screen with hand painting enhancing the color. I noted the image’s lack of real-life resemblance to Karsavina.

Gordon said, “Maybe it doesn’t look like Karsavina to us, but it may have to contemporary audiences.

“Old books and photographs are important in that they show us  how  the  figure was seen in her own time.”

But looking again, perhaps I was wrong; maybe the print does capture the temerity of Tamara.

What do you think?

One comment on “The temerity of Tamara, at Golden Legend Gallery”