Gomes transcends in Balanchine’s “Apollo” for ABT 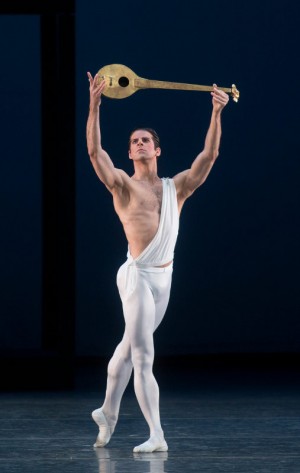 It was not just “awesome,” but indeed a privilege to watch Brazilian-born Marcelo Gomes, a great personal favorite, stretch his lovely long limbs as the Greek god, Apollo, in George Balanchine’s plotless ballet dating from 1928.

In the dance the young man encounters and frolics with three muses, Calliope, the muse of poetry, Polyhymnia, the muse of mime, and Terpsichore, muse of dance and song.

Paloma Herrera, a frequent Gomes partner, danced as Terpsichore. But it was Gomes who dominated with his great integrity and presence, and his handsome period-profile that evoked Rudolf Valentino. Otherwise “Apollo”‘s impact was lessened by an overly reverent approach to Balanchine’s stretches and lunges for the women, which should pull like taffy and even veer deliriously off-kilter. The women, at least, seemed intimidated by the ballet. “Apollo” struck this viewer as an odd program opener.

Apollo received its world premiere by Diaghilev’s Ballets Russes at the Theatre Sarah Bernhardt, Paris on June 12, 1928 with Serge Lifar as Apollo, Alice Nikitina as Terpsichore (Alexandra Danilova alternated with Nikitina in this role for the production), Lubov Tchernicheva as Polyhymnia, and Felia Dubrovska as Calliope.

The ballet received its first American performance by American Ballet at the Metropolitan Opera House, New York on April 27, 1937 with Lew Christiansen as Apollo.

“Apollo” has long roots with ABT. The company offered its first “Apollo” on April 25, 1943 at the Metropolitan Opera House, New York, with André Eglevsky as Apollo, Vera Zorina as Terpsichore, Nora Kaye as Polyhymnia, and Rosella Hightower as Calliope. That heady line-up has me time traveling right now.

The bumpy and not very edifying evening concluded with Alexei Ratmansky’s “Chamber Symphony,” and more vintage Balanchine, “Symphony in C,” to Bizet. ABT continues through the weekend with multiple presentations of its full-length, “Le Corsaire.”