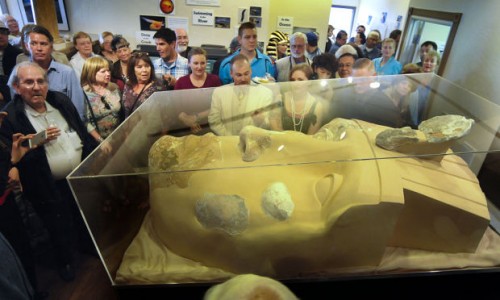 arts·meme friend Mary Mallory alerts us to a new exhibition featuring prime California archeology: the recovery and reconstruction of a huge prop piece from Cecil B. DeMille’s silent movie classic “The Ten Commandments” (1923).

A humongous face of an Egyptian sphinx-statue was recovered from the Central California sand dunes where DeMille directed his first (silent movie) version of the biblical classic.

The unveiling took place at the Guadalupe-Nipomo Dunes Center. DeMille’s lovely red-headed descendant, Cecilia DeMille Presley, was on hand to honor her grandfather, who was a titan of the American film industry.

A team of archaeologists, led by Peter Brosnan, excavated, restored, and reconstructed the face from little more than fragments. Read the story in the Santa Maria Times.

Film historian Scott Eyman, biographer of Cecil B. DeMille now making final edits to his soon-to-be-published biography of John Wayne, shared thoughts with arts·meme from his desk at the Palm Beach Post:

“It would seem like the idea of preserving a movie set, on the surface, would be pointless. They were built to be torn down,” noted Eyman. “But don’t tell me it wouldn’t be cool to walk through Tara [Scarlett O’Hara’s home in “Gone with the Wind”], or walk through the temple that Samson brings down in “Samson & Delilah.”

“Those huge sets that define the characters of a movie, that were art directed by great designers like William Cameron Menzies, and that were brought to life by directors like Victor Fleming or DeMille,… even if they were only  plaster, I think it’s really valuable and I’m glad it’s being done.

Eyman researched DeMille’s “The Ten Commandments” for his DeMille biography, “Empire of Dreams: The Epic Life of Cecil B. DeMille” (Simon & Schuster, 2010).

“The biblical stuff is the best thing in the movie; the way he summons the antiquity through these huge props,” Eyman continued. “He built the temple, he built the sphinxes; it was logistically arduous dragging those sets from Hollywood to the sand dunes, actually a triumph of engineering.“ 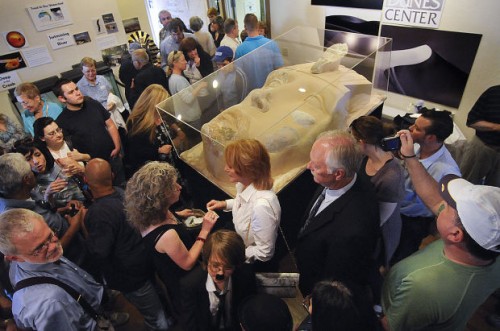