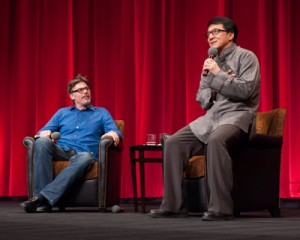 He kept popping out of his chair; at one point he perched on its arm. His energy was immense and direct. His water glass sat nearby, untouched. He was a Jackie Chan wind-up toy. Clutching a hand-held mike like a stand-up comic, he worked the room—the velvet-red Samuel Goldwyn Theater of the Academy of Motion Picture Arts & Sciences.

It was an “Academy Salute to Jackie Chan”; the movie paired with a marvelous exhibit of kung-fu movie posters on display in the lobby of the Academy’s Wilshire Boulevard headquarters.

A huge throng of fans gathered to watch the mop-topped actor banter and spiel. A loose-fitting grey Mao jacket hung over his still shapely figure. Penetrating his Chinglish schtick proved challenging — and hilarious.

“Movie is everything for me,” pronounced comic-action star Jackie Chan, barely pausing to register that statement’s profundity. His punctilious mastery of acrobatic stunts still does not extend to English-language verb conjugation. “I risk everything to make better movie.” 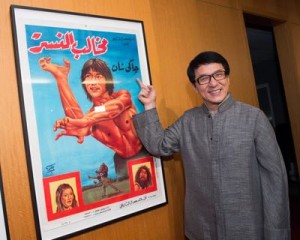 Rapping vividly to his interlocutor and good foil, writer Geoff Boucher, Chan held spellbound an audience of mostly middle-aged guys prior to a screening of “Police Story III – Super Cop” (1992).

The vastly entertaining “Police Story III – Super Cop” (released in the U.S. as “Supercop”) splashed across the Academy’s huge screen with two rows of subtitles (Chinese characters, English translation). It gave off nostalgia for an era just two decades past. The rare cellphone, or even computer, was on view; instead we witnessed a time of high action, huge combustion, and a joyous freewheeling energy that has gone missing in the 21st century. Flick tells its tale with great self assurance: an undercover cop caper in China who tours colorful Asian locations. Crazy comic encounters, kooky characters, scary bad guys, great action set pieces involving trains, helicopters, sport cars. There’s shoot ’em ups and fiery blow-ups. It also features the precise and lethal martial-arts scissor-kicks of Michelle Yeoh, who shines as Chan’s disciplined fellow undercover cop.

On cutting his movies:
“We filmmaker finish movie, we think, this movie people never forget. [But] We have to compromise with buyer, distributor. Director, we do not like to cut. You just don’t know! This distributor, this theater owner, they say too long. We need twenty minutes shorter, thirty minutes shorter. They need time to sell popcorn. They cut it by themselves! I [rather] cut it because I know what to do. “Project A” was two hours plus. I don’t want to cut it. They cut it. Audience tells me, “Jackie, the writer is terrible. It doesn’t make sense.” Or they say “the action is good. But the story make no sense.”

“So I cut it myself. It hurts filmmaker so much. So much money, so much years to make one movie.”

On stunts in movies:
“These days stunts so easy. When I think my old days … wow… [I was] so stupid!

“I see “Spider Man,” “Iron Man” [quick stunt takes edited together to look impressive], I say, ‘I rather Jackie Chan born in the U.S.’

“In old days, we do everything ourself. You break ankle, finger. Working on “Enter the Dragon” [with Bruce Lee] as stunt man. [I got hurt.] Every time he turn around, he see me, I rub my head. [Ow!] That how Bruce Lee know me.

“I see my old tv show, my old movie. I watch and say “wow.” A lot of stunt I cannot do it today. The old day, I have to do for living, for money. When I getting famous, I keep doing stunts for fun.

“Every [stunt] shot [in Police Story III] is me. I do scare~! Every stunt I really really scare. That shot, I jump to helicopter, that shot … really really scare. We film in Malaysia, the government give us the whole downtown. Paparazzi watching my stunt. I’m really scared, the [mattress below] as big as a tofu.

“I think, oh what the hell [and he just made the leap.] It’s like a public execution. It’s a terrible experience, I don’t know where the power coming from.”

How he changed his style from Bruce Lee’s:
“I spend more than 2 – 3 years to change my style. So many Bruce Lee [imitators, following Lee’s 1973 death].”

He was encouraged to imitate Lee, making howling faces and hard fists.

“I’m not this kind of person. I was 18-19 years. I think, How I different than Bruce Lee? He kick high. So I kick low. Every person do this [Bruce Lee imitation]. Except Jackie Chan. I always want a different. I always choreograph different.”

On special effects technology:
“I don’t know special effects! On “Drunken Master” $150,000 to make the movie. My salary $9,000 I share half with my company. I make $4,000. We don’t have money for special effect. I have so many machine. Nobody knows how to use. I do computer editing [now]. I don’t like it. I like editing at night, with all the film [hanging] around neck. You can touch it.

“I want to learn from American director, Spielberg, Lucas, Cameron. But they too good on computer. I cannot learn from them. I learn from Buster Keaton, Harold Lloyd. James Cameron invite me on set of “Avatar.” Nothing on set! I really scare! I run away. I only know traditional camera, standard camera. The technology today is so beyond me.”

One comment on “Jackie Chan fast, furious, funny at the Academy”