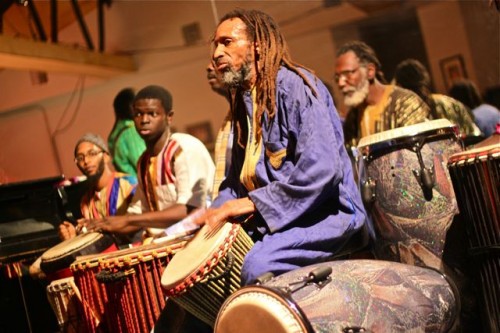 PausePlayPlayPrev|Next
Point me to a better show. I’m open minded! But now in my third year of attendance, I find the year-end Kwanzaa Celebration at Lula Washington Dance Theatre not just exhilarating fun, not only pulling you to the edge of your chair with non-stop great dancing, but, an added pleasure, it blasts off to a double-row barrage of ballistic, live African drumming. Noteworthy was soloist Magget Sow, 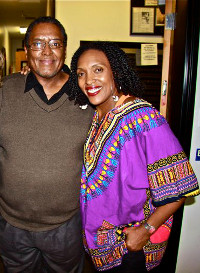 who grew up drumming at the Crenshaw Boulevard dance studio and who dapples in a brilliant overlay of syncopation, a cacophony so vivid and sparkling that listening, it twangs in your chest. If you focus on it, it zings in your brain.

So many contribute to this production — not the least of which Lula’s attentive and responsive audience — but one name merits mention. That’s Tamica Washington-Miller, the company’s associate director, who oversaw the Kwanzaa show preparation (the main event is “Harambe Suite,” but additional repertory added) while her mother led the professional troupe on a 12-city tour of Russia (they toured 18 Russian cities in 2010). Everyone knows that Tamica Washington-Miller is one of the best dancers in Los Angeles. All hail Tamica.

The company starts its spring tour soon, stopping in 14 cities in the Mid-Atlantic region. In California, LWDT performs in Temecula in a few weeks, Jan. 18-19, 2013.