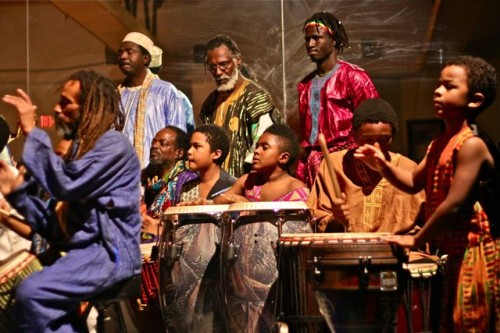 Interspersed amongst the thundering herd of kickin’ African drummers that propelled Kwanzaa madness at Lula Washington’s Crenshaw Boulevard dance studio over the holidays was a passel of tiny tots … young gentlemen. They banged the drum, and not slowly. I asked our friend Erwin Washington, Executive Director and Co-Founder of Lula Washington Dance Theatre, for an explanation. Says Erwin:

I secured a grant from the House of Blues Foundation to purchase drums to be used in a drumming class for boys as young as five years old. The idea is to train them to drum for the African classes and then later on for shows. It’s also part of a program to engage boys at the dance studio. They also take Hapkido martial arts together.

The Remo drum manufacturer worked closely with us and gave us a cut rate price. So, we got nine REMO Djembe and Jun Jun drums. The little boys you saw drumming are all in the drum class. The teacher is Jah Amen Mobley, father of Midosi Mobley.

By the way, the drummer you were so excited by was Magget Sow, son of Malik Sow from Senegal. He is the tall, dark-skinned drummer who was so exciting. Midosi was playing and sitting next to his dad. Midosi also grew up at the studio. A lot of people grow up at our place, over many long years.

Thanks, Erwin, and nice work!