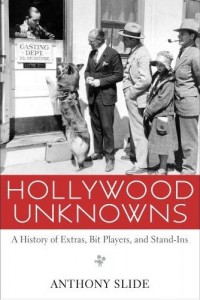 We received this nice note from our good friends at Larry Edmunds Bookshop:

Author Anthony Slide is no stranger to the Larry Edmunds Bookshop. His association goes back much farther than my 22 years, and the number of books this resident film historian for the Academy of Motion Picture Arts & Sciences has written is more than I’m sure even he could remember. This time out he’ll turn his attention to Hollywood Unknowns-A History of Extras, Bit Players & Stand-Ins and give us a story behind the story. 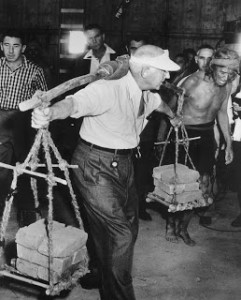 The book pays homage to extras from the silent era to the present, celebrity extras, the Hollywood Studio Club, Central Casting, stand-ins, doubles , animals and all those who may have made it onto the screen, but remained anonymous. This is their story, interwoven with anecdotes that include stars like Barrymore or directors like DeMille , it will be an interesting night devoted to the  Hollywood working men and women and their collective achievements in film history. Mr. Slide will sign copies of his new book.

At left, director Cecil B DeMille demonstrates to an extra how a yoke of bricks should be carried on the set of the Ten Commandments (1956)