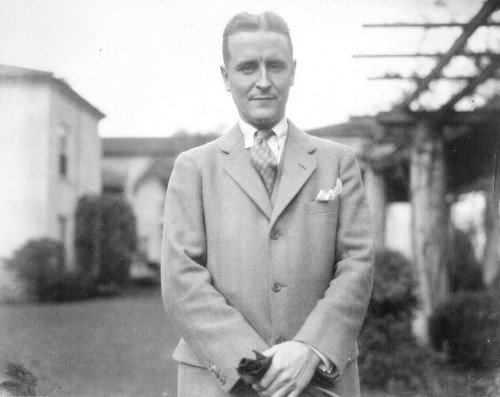 Here stands the great American novelist F. Scott Fitzgerald in what strikes me as his penultimate Los Angeles portrait. Bleary-eyed but putting a good face on things — what we do so well in L.A.

Noshing one night at Greenblatt’s Deli on Sunset Boulevard, I chatted with proprietor, the son of the original owner. He shared with me the macabre tale that on the day the writer died, December 21, 1940, Fitzgerald’s lover, gossip columnist Sheila Graham, dined at the deli and took home a chocolate bar for Scott. So F. Scott Fitzgerald’s final meal before he petered out in West Hollywood was a candy bar from Greenblatt’s. God bless you, FSF. I really love this writer and I care so much that he died in L.A.

So we beat on, boats against the current, borne back ceaselessly into the past.

On Wednesday I’m attending the L.A. opening of GATZ, a theatrical retelling of “The Great Gatsby” in a seven-hour enactment of the Fitzgerald novel, arguably the Great American One. The prospect of swilling around in his language, further, in “Gatsby,” for hours on end is very exciting to me.