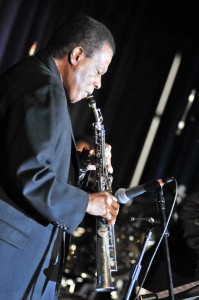 At a swank do at the Universal Hilton Hotel Sunday evening, the Los Angeles Jazz Society, for the past 29 years the labor of love of Flip Manne (she’s the surviving widow of drummer Shelly Manne), honored saxophonist Wayne Shorter as its 2012 Jazz Tribute Honoree.

A grand master of the art form both as composer and player, Shorter, whose jazz pedigree peaked with his mid-1960s membership in Miles Davis’s quintet (or was it his launching of the fusion group Weather Report?), thrilled the audience, all supporters of the Society’s jazz educational programs.

Among the evening’s other honorees was guitarist John Pisano, garnering a Lifetime Achievement Award, and Denise Donatelli, recipient for Jazz Vocalist. A cool cat named Gordon Goodwin accepted the award for arranger/composer, then led his Big Phat Band in his Grammy-winning blast-out of Gershwin’s “Rhapsody in Blue.” So colorful and so well played by Goodwin’s rambunctious 16-piece orchestra. 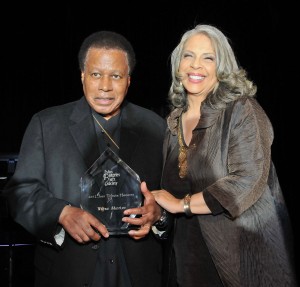 Presenting Shorter with the award (recent recipients include Arturo Sandoval, Poncho Sanchez, George Duke, and James Moody), singer Patti Austin quipped, “I spoke to Wayne a little while ago and asked him, ‘Why me?’ He told me he thought a woman should present his award. But then he asked me to send him “binders of women”!

“Wayne’s from New Jersey; from the school of innovators. He’s going to turn 80 next year. He’s a Leo-Virgo cusp. He’s my favorite Buddhist,” she said.

Shorter also made comments: “One word keeps coming to me. The word is singularity. When I talk to young people, I ask them what music is for — beyond money and fun. What is anything for? It has to be worth trusting being in the moment. That’s what jazz is. Being in the moment is creating singularity in your life.

“Tragedy is temporary. A single moment is an eternity. Singularity is about handling the unexpected.

“How do you rehearse the unknown? Not to be arrogant or scared … you have to start with courage or fearlessness. You have to turn a train wreck into an opportunity,” he offered, with slight solemnity.

Then breaking into a devilish grin he added, “and … have fun wid’ dat!”

With those words, Shorter repaired across the stage and joined a clutch of jazz kids from UCLA’s Thelonious Monk Institute of Jazz Performance. Leading them, he laid down heavy sounds. Launching with his soprano saxophone into a super slow anthem, he built a wall of noise that erupted into the occasional screech, or blaring. It was all deliberate, all muscular; yes, he blew a mighty horn.

A huge thrill to hear Wayne Shorter in such great form.