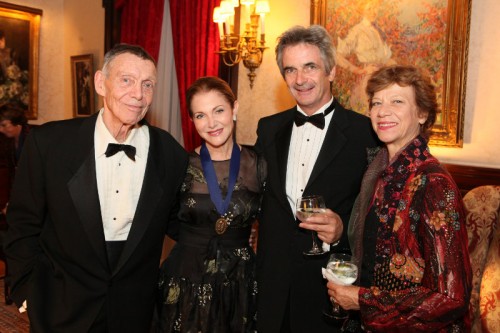 PausePlayPlayPrev|Next
New Yorkers gathered on October 3 to honor legendary choreographer Paul Taylor at a State Dinner at the iconic Lotos Club, founded in 1870. Mr. Taylor received the Medal of Merit, the Club’s highest honor given to leaders in the arts and cultural worlds.

Among his many other honors, Taylor is the recipient of the Kennedy Center Award, the National Medal of Arts, and the French Légion d’Honneur.

The Lotos Club, one of the oldest literary clubs in the United States, was founded in 1870 by a group of young writers, journalists, and critics. Frequent guests then as well as now include top scholars, musicians, painters and sculptors, art collectors, historians, novelists, and college presidents.

Club President Anne Russell read letters of praise from Mikhail Baryshnikov, Ellsworth Kelly and Alex Katz, all of whom have worked closely with Mr. Taylor.

“Mr. Taylor embodies the tenets that the Lotos Club holds so dear: to promote and develop art, and encourage and inspire other artists and audiences alike,” said Russell.

In other Paul Taylor Dance Company news, this time in Southern California, the company’s great lead dancer and its senior-most member, Michael Trusnovec, will conduct a master class at Laguna High School in Orange County November 15.