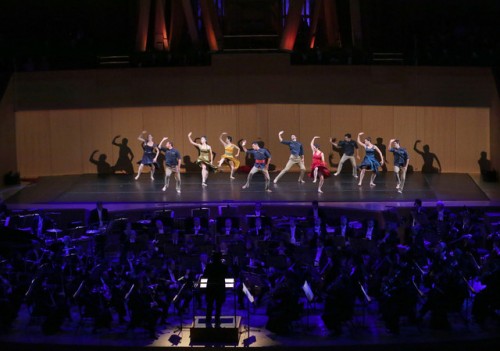 A big week for dance in Los Angeles: first came the premiere of L.A. Dance Project under the direction of Benjamin Millepied. Then followed Thursday’s symphony gala celebrating what Los Angeles Philharmonic conductor Gustavo Dudamel called, in pre-concert remarks, “a union of the arts.” Dance shared the stage, rather marvelously, with our symphony orchestra.

Grand Avenue got closed down and an enormous party tent installed. Well-coiffed women, both thin and rich, slunk around Disney Hall’s serpentine corridors. It was the fourth such season-launcher since Dudamel, 31, was appointed as the Phil’s eleventh conductor. “How do you put up with me?” he quipped from the stage, adding, “I feel old.”

The intermission-free program featured three of the art form’s sub-genres – contemporary modern, classical ballet, acrobatic jazz. Dancers, inured to performing to the most inadequate of taped accompaniment, instead drank in the joy of the majestic tones of a world-class symphony. They trod a Marley-covered platform placed behind the orchestra. The curvilinear Disney Hall, lacking the distinct frame of a proscenium arch, made it tough to visually orient, especially in the case of the ballet dancers. 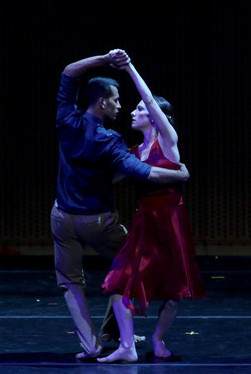 Marshall fielded the ten ripping dancers of BODYTRAFFIC, a local troupe that has been on a steep upward climb lately, garnering awards and grants from New York’s Joyce Theater Foundation. Marshall garbed his dancers not in the Eastern European shtetl-shmattes that have been his winsome trademark, but inspired by the sounds of the Adams score shifted them farther eastward – to China. Not traditional China, but the kitschy outpost of Mao’s communist revolution; the men in drab military shirts, the women simple silk dresses. Doo-dads of chinoiserie  – red flags, white fans, red confetti – circulated the stage, a tad half-heartedly. The piece was at its best when the ‘Traffickers spooled Marshall’s quick-paced, unison nervous-twitching at which he is the undisputed king and that’s a huge kick to watch. BODYTRAFFIC excels at this draconian stuff. Stillness provided a welcome respite; the dance’s transitions and thinking-through, however, were sticky. 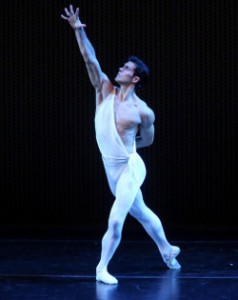 Adams’s music vaporized into thin air (key word “thin”) when the Phil powered into Igor Stravinsky’s “Variation d’Apollon.” Hearing that snatch of Stravinsky made the truncating of George Balanchine’s great masterwork, “Apollo,” almost bearable. Italian ballet man, Roberto Bolle, darkly handsome, okay, as gorgeous as an classic-Hollywood matinee idol, stretched his pliant limbs in white tights and matching tunic. The “Apollo” snippet, intended to showcase a man dancing lyrically, was rendered pretty meaningless when stripped of the young god’s interaction with his three female arts-muses. But it provided a delicious gala canapé. And a dizzying glimpse of Bolle. 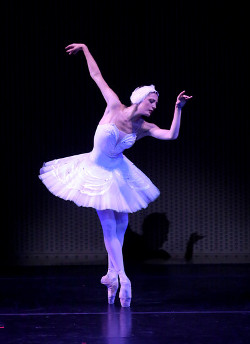 Dudamel then swapped from Stravinsky to Saint-Saens, for “The Dying Swan.” Perishing on her pointe shoes was the Russian-born, American Ballet Theatre soloist Veronika Part. So touching to see the hugely historic dance-sketch that dates back a century; watching it, I thought of all the greats who schlepped their Swans to L.A., starting with Anna Pavlova in 1915. Part, who excels at adagio work, bourréed her beautiful feet while eliciting the requisite agony, but she did not fully transcend. She didn’t go for the rubbery “boneless” arms trick. And how do you rock the Dying Swan in a modern tutu with no feathers? Just seems wrong. 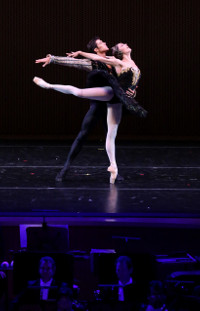 After the Phil’s heart-pounding delivery of interludes of Tchaikovsky’s great “Swan Lake” score, Part reemerged in black regalia, the juicy Bolle in tow, to dance the Black Swan pas de deux. A generic ballerina, Part disappointed as Odile, nailing nary one of the technical demands of this most virtuosic of female roles. She failed to personify the Black Swan’s perfidy or her, um, sexiness. [Call Natalie Portman?] Nor did Part appear to remotely enjoy having a huge orchestra deliver to her doorstep Tchaikovsky’s marvelous rhythms, accents and fillips. Bolle outdanced her; he even hand-cranked her through her pirouettes.

None of it mattered all that much, it was a gala and meant to be fun.

The evening wrapped with three jaunty dance episodes from Leonard Bernstein’s “On the Town,” always a happy sashay into American musical-theater history. Choreographer Josh Rhodes charmed immensely with his winning depiction of four sailors on leave. Moseying haphazardly into Disney Hall aisles were the well-cast Sam Cahn, Marty Lawson, Andy Mills and Christopher Vo. Their noses stuck in a vintage street map, they were lost tourists. In a hilarious send-up of symphony decorum, the quartet approached the podium and tugged on the Dude’s tuxedo tails. 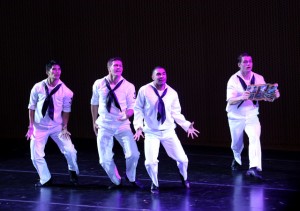 The conductor, still frenetically poking his baton at his musicians, gesticulated directions to the dancers. So funny! Taking the stage, the foursome dug into a beautifully choreographed montage that engaged acrobatics and a clean-cut jazz vocabulary to portray carousing, drinking, lady-hunting, and sailor brawling.

Another winner of the evening: the long time programmer of Glorya Kaufman Presents Dance at the Music Center, Renae Williams-Niles. Niles offered a monstrously ambitious platter of goodies to the goddess Terpsichore this week. She helped realize the impossible —  the launch of L.A. Dance Project, a local dance troupe aspiring to national recognition. Then a mere five days later she curated the Philharmonic gala’s dance content.

The Dude may have met his Dudette. Bravo Renae.