Architectural duo to reconfigure May Company building into film museum 2 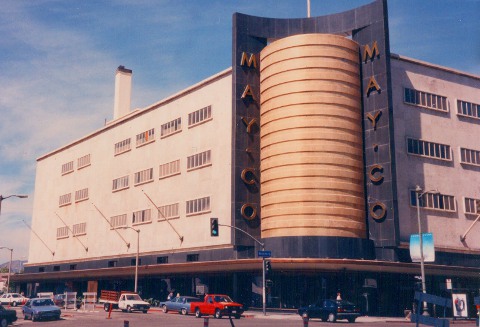 The new museum will occupy the former May Company building, a beloved Los Angeles icon that sits at the corner of Wilshire Boulevard and Fairfax Avenue, the dead center of the city. It’s a stellar team. The Italian-born Piano is a genius, a top global architect. Pali’s an L.A. native (we like that) who brings a huge portfolio of arts-related building.

Piano in 1998 was awarded the Pritzker Prize – architecture’s highest honor – is the founder of the Renzo Piano Building Workshop. Piano’s significant design accomplishments include the Centre Georges Pompidou in Paris, the Central St. Giles Court in London, the Kansai International Airport Terminal in Osaka, the Menil Collection in Houston, and the headquarters of The New York Times.

Piano also designed the expansion of the Los Angeles County Museum of Art (LACMA), whose campus will include the upcoming Academy museum.

Pali, a Los Angeles native, is the design principal and co-founder of Studio Pali Fekete architects (SPF:a). He has been lauded for his design of the Wallis Annenberg Center for the Performing Arts, for which SPF:a received a Los Angeles Business Council Architectural Award and an AIA Los Angeles “Next LA” Award. In addition, Pali is renowned for his Los Angeles-area restorations of the Greek Theatre, the Gibson Amphitheatre, and the Pantages Theatre, the latter earning SPF:a an LABC Award for Historic Preservation. For the firm’s work as the executive architects on the renovation and expansion of the Getty Villa museum, SPF:a received the AIA Los Angeles Presidential Award.

“It is an honor and privilege to work with the Academy in bringing to life a historic, iconic building that I love with the story of motion pictures,” said Pali.