BYOB – Bring Your Own Blanket – to “Oscars Outdoors” 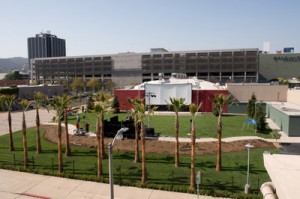 In an act of magnanimous good citizenry and cultural benevolence, the Academy of Motion Picture Arts and Sciences (AMPAS) has unveiled its new screening venue and summer on-the-lawn film series.

Impressive. It’s located on Vine Street south of the ArcLight Cinema. Click the photo to view the build-out.

The “Oscars Outdoors” open-air theater is part of the organization’s nearly 7.5 acre Hollywood campus, already the site of the Pickford Center for Motion Picture Study, home to the Academy Film Archive, the Science and Technology Council and the Linwood Dunn Theater.

Friday night’s “Oscars Outdoors” will screen classics and contemporary favorites for adults to cuddle under cover-of-quilt in the cool night air. Saturdays are devoted to family-friendly kid flicks — an incredibly good idea. 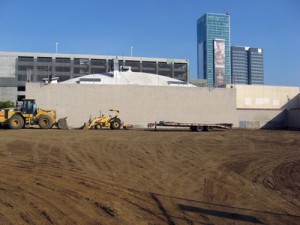 Said Academy President Tom Sherak: “The events we are planning are an ideal way to share our love of movies with a wider audience.”

Indeed. The space now features an expansive lawn and an adjacent 10,000-square foot plaza, and will include a permanent 40×20 foot screen.

“These are not just screenings, but events,” noted Randy Haberkamp, Managing Director, Programming, Education, and Preservation. “We’re bringing a diverse range of programs and experiences to audiences as only the Academy can.”

Fri July 13: TO BE ANNOUNCED
Sat July 14: THE PRINCESS BRIDE

Fri Aug 10: YOUNG FRANKENSTEIN
Sat Aug 11: BACK TO THE FUTURE

Pictured: Judy Garland with, from left, Jack Haley, Bert Lahr, Ray Bolger, and Frank Morgan during the production of THE WIZARD OF OZ, 1939.