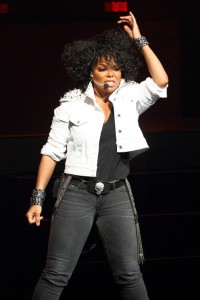 Twenty minutes after Janet Jackson’s much anticipated “Number Ones: Up Close and Personal” gala concert was scheduled to start Thursday evening at Palm Desert’s McCallum Theatre, some in the audience began to squirm in their seats. Many of the theater’s older patrons, though geared for an unusual performance, were unaccustomed to late-starting rock shows.

Suddenly, into the theater and up an aisle rushed an entourage. Burly body guards surrounded a familiar figure. It was the matriarch, Katherine Jackson, appearing only days after the sentencing in the murder trial of her fifth son, Michael. Her third son, Jermaine, 56, hastened by her side as the group of about eight filed into the theater’s only empty row. The house lights dimmed and the stage came alive.

Janet Jackson, 45, had held the show for her mother’s arrival. In a welter of mixed feelings for this beleaguered American show-biz family, the performance began.

Jackson, a hearty trouper, plunged in, delivering a nearly two-hour concert sans intermission. Warbling in her soft but steady voice that occasionally fluttered to the top of her range, she led a stageful of performers — seven dancers, a six-piece band and three back-up singers — through a tightly packaged evening of her hit songs primarily from the 1990s. Out they poured, one after the other, Pleasure Principle, Control, What Have You Done For Me Lately, Miss You Much, Nasty, Escapade, When I Think Of You, That’s The Way Love Goes, Scream, Rhythm Nation. The five-time Grammy award winner, literally dressed in battle gear, anchored herself on this impressive bedrock of pop music.

It was wonderful to see Jackson looking healthy and well after the haunting vision of her brother’s decline. In the intimate 1,127-seat McCallum we got a good glimpse of her. Her widespread Kohl-lined eyes dotting her sweet diamond face, she shook her headful of Shirley Temple curls (only, jet black), sometimes scrunching it with her hand. All of this bobbed prettily atop her fulsome figure. The Jackson family’s remaining scion carts the baggage of a myriad body looks — from anorectic to plump. While she was not an ounce overweight, on Thursday she arrived fully loaded. It was fun to watch — her padded hips, shapely butt, long haunches, and lovely feminine torso. 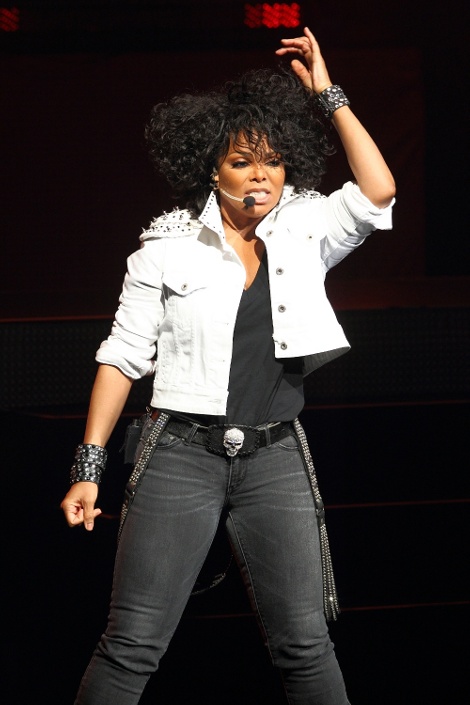 But would someone please take “control” and dress this beautiful woman for the stage? Jackson’s costumer presented her in tight grey jeans, a white jeans jacket and laced combat boots, which, despite expressing the earthy side of her character, looked dated. It was fine as a specialty look, but not over the long haul of the evening. Not one thread in it moved, for one problem.

Janet Jackson is not her brother. You notice this. Hey, only one genius per family. Both in voice and in movement, she lacks MJ’s crystalline brilliance, his quicksilver quirkiness. She’s more studied, earthy, solid. But as one audience member, Steven, 49, of Los Angeles, noted after the show, “It was genuine. She worked her butt off.”

“Phenomenal,” said his friend Audie, also in his forties, from Palm Springs. “For 45 years old — the energy, the effort. You can see she loves her fans.”

A lovely interlude had Jackson seated on a stool with a hand mike, crooning ballads, Come Back to Me and Let’s Wait Awhile, with its romantic urging for a couple to be patient. Here her voice shone through, breathy and vulnerable. She needs coaching on hand movements however.

Christopher, 31, of Palm Desert said, “What a show. She had great energy. She got the crowd going.” He added, emphatically, “She’s sweet.”

“I loved how she showed respect to her family,” said Paul, 60. “She was gracious.”

Prior the performance, Carl, a Palm Springs city worker said, “She’s on my bucket list, you know when you get older there are those you want to see. I’ve followed her since the good times. And this is an excellent venue. I would not go [see her] in a huge stadium.”

Local residents were thrilled that Jackson chose to perform at a small venue in their community. “It’s huge,” said Earl, 41, of Palm Springs, attending in a group of 15 family members, “She sells out stadiums.”

Karina, 29, of Rancho Mirage said, “I thought it was amazing. It was a dream. I grew up watching her on “Good Times.” I loved her since I was nine. We’re so honored that she came here.”

Jackson said in a statement, “So many communities are facing cutbacks in the arts and this beautiful place continues to grow and offer programs to the people who live in the Coachella Valley. That speaks to my heart, especially because of their outreach to young people.”

Adding to the evening’s wonderful vibe, Jackson’s presence helped raise $1 million for the McCallum, a result, according to a spokesman, that the theater has not garnered since 2008.