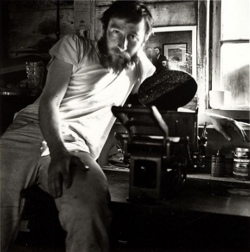 It’s the ninth installment of Filmforum director Adam Hyman’s extensive and rigorous 24-program exhibition of experimental films made in L.A. between 1945 and 1980. This survey fits neatly into the time frame of the Getty’s Pacific Standard Time examination of post-War California art. LA Filmforum is a participating organization in PST. 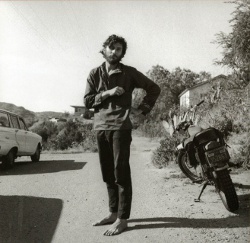 In the mid-1960s, the fascinating jazz-inspired collage artist, Wallace Berman, straight outta Boyle Heights, communed with a close-knit circle of actors and artists to screen underground films in their bohemian digs in Topanga Canyon. The films were influenced by Berman’s spiritualist and radically amateur concepts of art that nevertheless thrived in the intersection among art, Hollywood, and the institutions of the semi-commercial underground.

Co-curated by arts·meme friend, USC Professor David E. James, with Rani Singh of the Getty Research Institute, this screening runs in conjunction with the Pasadena Armory’s exhibition “Speaking in Tongues: The Art of Wallace Berman and Robert Heinecken, 1961-1976,” which will be open that evening before the screening.