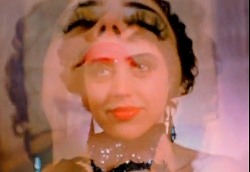 Los Angeles Filmforum screens a wonderful line-up of short experimental films under the rubric of Alternative Projections: Experimental Film in Los Angeles, 1945-1980. The next chapter of the multipart series happens on October 16 with “Industry Town: The Avant-Garde and Hollywood.”

Alternative Projections is part of Pacific Standard Time: Art in LA 1945 – 1980, an unprecedented collaboration of more than sixty cultural institutions across Southern California, coming together to tell the story of the birth of the L.A. art scene.

So far, PST is an unprecedented numbing cornucopia of stuff … but it strings along for a year, so, slowly, slowly, perhaps we’ll see it.

FilmForum major domo Adam Hyman explains in notes that many experimental works have explicitly played with the dominant film industry (Hollywood and beyond), parodying its forms or structures of manufacture or utilizing images from classic and not-so-classic films as the raw material for new creations.

The program examines the ever evolving approaches to the industry, practice and lifestyle of Hollywood. First up on the 16th is one of the earliest examples of commentary on the Hollywood quest, and perhaps the first made with a expressionist bent, “Los Angeles, Life and Death of 9413: A Hollywood Extra.”

What fun, clever. Can’t wait. Also on the program: