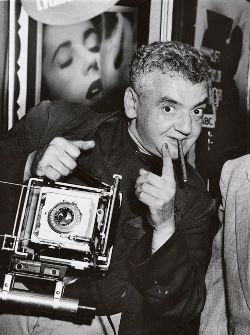 “Naked Hollywood: Weegee in Los Angeles,” at the Museum of Contemporary Art (part of the Pacific Standard Time initiative), brings out of near oblivion 200 photographic artworks and a few films, from the late 1940s through the 60s, by and of tabloid photographer, “Weegee” (real name, Usher Fellig, born in the Ukraine).

Weegee’s moniker combined “squeegee” and “Ouija,” the latter referring to his uncanny ability to predict New York crime scenes. But this show focuses primarily on Los Angeles, where Weegee migrated in 1947 after achieving success in New York.

Once in L.A. (he called it ‘Newark, New Jersey, with palm trees), he roamed the streets with his camera, cigar in mouth, shooting mid-century Angelenos; the weirder the people, the more Weegee liked them. He combed storefronts for naked mannequins, shooting them in groups and calling them poorly paid Hollywood extras. In one hilarious photograph, he crowds himself, a woman, and several mannequins into the front seat of a car. 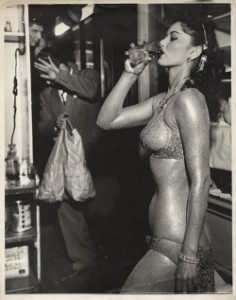 He wormed his way into Hollywood sets, movie openings and stars’ homes. Photographing Norma Shearer signing an autograph, he quickly reversed direction to shoot her star-struck fans, gathered in mobs, nearly hysterical at the sight of a real movie star. He shot fans in the background, with the back of the star looming larger than life. He photographed unflattering moments; Liz Taylor wolfing down a meal. He manipulated film, giving Marilyn Monroe a pig-like nose, Liz Taylor a nearly blanked out face, and Audrey Hepburn a humorously grotesque visage. These images he published in  “Naked Hollywood,” © 1953; but the photos, although influencing Diane Arbus and Andy Warhol, were not well received by the public. Weegee met Warhol briefly in the late 1960’s, had a photograph taken of the two of them and shot several images of the pop art icon: all in this exhibition. 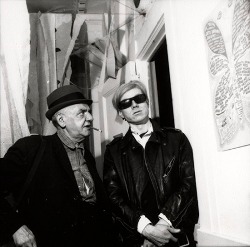 This voyeuristic show portrays Weegee as a shameless ham. Photos by “Unidentified Photographer” are of Weegee himself, short, impish, with a mischievous gleam in his eye, at times evoking Shakespeare’s Puck, always with a cigar in his mouth. In a few shots, he poses with his camera. In others, he takes the photographer’s stance next to the subject. In one photo, he stands, camera in hand, alongside several nude mannequins. He also had several bit parts in movies, and had these scenes documented.

Weegee was shooting movie fans and people on the edge, and having photos taken of himself, both before the paparazzi and performance-art phenomena. We enjoyed this darkly entertaining, delightful art show.

Liz Goldner is an arts writer blogging at contemporary-art-dialogue.